NYS travel advisory and restrictions at the U.S. and Canadian border linger

"Everybody right now is saying, 'Listen until we can get our own backyard and our house in order, don't open up the front door and invite guests in.'" 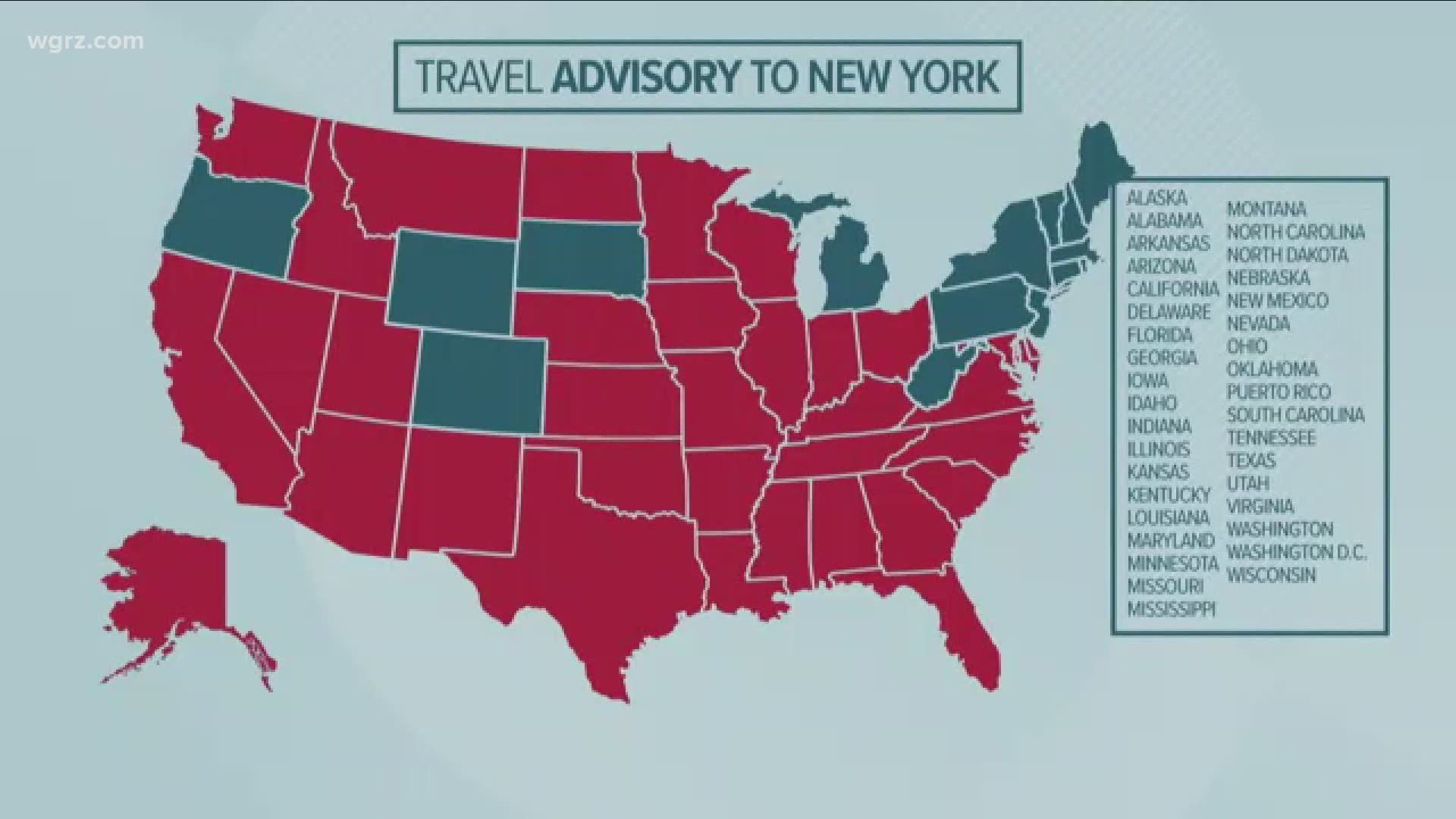 Illinois, Kentucky and Minnesota were added to the list on Tuesday. In addition, the NYS Department of Health added Washington, D.C. and Puerto Rico. Travelers coming from any of the places listed with high infection rates will have to quarantine for two weeks upon arriving in New York State.

These are all states where, based on a seven-day rolling average, the number of positive cases is more than 10 per 100,000 residents or they are states with a 10% or higher positivity rate over that same rolling average.

"We're not going to change the formula. We just need the nation to get the virus under control the way we did in New York, frankly," said Governor Cuomo.

But, based on that formula, how long will it be before we can travel from one state to another without restrictions?

We asked Dr. Thomas Russo, the chief of infectious diseases at the University at Buffalo, for his medical perspective.

"As we move forward there is gonna be some states that are gonna get off the list sooner than others and I think those states will be those that have implemented the public health measures such as mandatory mask usage, closing the bars and minimizing large gatherings," Russo said.

He added, "These hot spot states now have plateaued it looks like in the number of cases but we really haven't seen a great downward trend yet so I think it's gonna take a little bit of time for them to get below those benchmark levels that have been defined by Governor Cuomo."

Russo told 2 on Your Side, from what we've seen already, typically the peak comes much faster than the decline. He said for some states it may be weeks, others months.

"So it's gonna be sort of a very fluid and dynamic process I anticipate over the next six to eight months as we're working our way towards getting a safe and effective vaccine," Russo explained.

Additionally, restrictions along the U.S. and Canadian border are still in effect.

According to the Canadian government's website, "As of July 21, 2020, the restriction on all discretionary travel at the Canada-U.S. border that was initially implemented on March 21, 2020, was extended until August 21, 2020. This applies to all foreign nationals with some exceptions for immediate family members."

Mayor Jim Diodati of Niagara Falls, Ontario told 2 on Your Side the restrictions have had a significant impact already.

"It's been frustrating from a personal perspective as well from a tourism perspective because typically 25% of the 14 million people that come here to the Canadian side of the Niagara Falls are from the U.S," said Diodati.

As the COVID-19 situation in Canada and the U.S. evolves, Diodati believes it could be a while before we return to normal travel across the border.

"I'd be surprised if anything happened before the U.S. election on November the third," Diodati said. "And there's still talk that this could end up going until the end of the year. People are just waiting for the vaccine."

He said the ripple effect could be devastating, but he understands the reasoning.

"Given the fact that there's no pandemic manual, there's no COVID for Dummies, and we're not really sure what the heck is going on, I think right now playing it safe is probably the best approach rather than opening up too soon and then closing again,"  Diodati.

He added, "Everybody right now is saying, 'Listen until we can get our own backyard and our house in order, don't open up the front door and invite guests in,' so we've all got that approach."