President and CEO Mark Sullivan told reporters Wednesday South Buffalo Mercy is "operating as best they can" amid the strike but is economically strained. 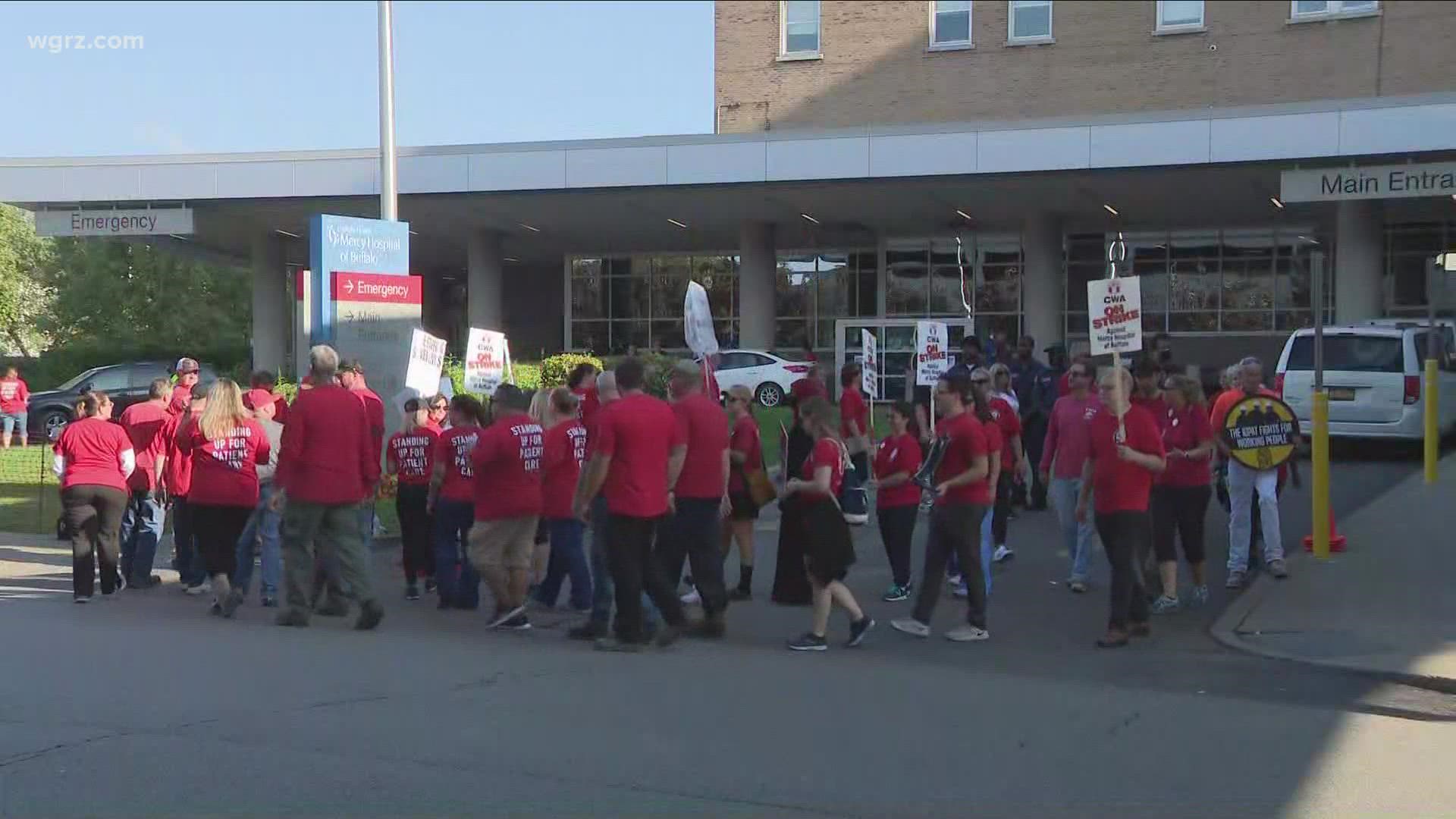 BUFFALO, N.Y. — A day after resuming contract negotiations with the CWA, Catholic Health's President and CEO spoke to reporters for the first time since the union went on strike at South Buffalo Mercy Hospital.

During a press conference Wednesday, Mark Sullivan said he was "encouraged" to be back at the bargaining table after a five-day hiatus and would work towards an agreement that benefits both parties. He highlighted Catholic Health's proposal which remains unchanged since the strike began, so it'll be up to the union to offer critiques.

The CWA continues to demand that their contract include safe staffing ratios, so nurses and techs aren't caring for an excess number of patients, as they say, has become common practice at Catholic Health hospitals.

Sullivan rehashed the hospital's three-part staffing proposal during Wednesday's press conference. It does not include ratios explicitly but does propose adding 258 full-time associates, using staffing grids to control the patient employee balance, and calls for bonus pay to compensate nurses or technicians who help out when additional staff is called in to meet those targets. Without ratios, however, union members say they worry staffing would ultimately return to the "status quo."

Responding to a question about nurses' concerns about being overworked with too many patients, Catholic Health's President and CEO said, "there are probably examples of that in every hospital in this nation. The goal is, that's not what we're about. We're about making sure we can change that which when you read the staffing proposal that helps us to start to address that."

Sullivan added that despite the lingering disconnect additional hospital leaders are being involved in negotiations to address specific concerns. He said the hospital is "operating as best they can" amid the strike but is economically strained.

As far as patients are concerned, Sullivan said they remain South Buffalo Mercy's number one priority. He added that as of Wednesday afternoon, 132 people were receiving care, and just over a dozen people were being admitted daily.

The New York State Department of Health reportedly visited the hospital as recently as Tuesday.

When asked for a statement about their negotiation proposal CWA union representatives provided the following:

"In response to Catholic Health’s press conference today, Jennifer Williams, a charge nurse who has worked at Mercy Hospital for 14 years, issued the following statement:

“The reason the staffing crisis at Catholic Health is so extreme is because the hospital system kept punting on the concerns we were raising and didn’t take negotiations seriously until the 11th hour. Catholic Health got us into this crisis and they have the power to get us out of it, and we will be on strike until we have a fair contract that addresses the deteriorating staffing conditions and ensures we don’t get to this point again. Frontline Catholic Health workers are united in our concerns about staffing and determined to fight until the issue is addressed satisfactorily. Mark Sullivan would know that if he came to talk with us on the picket line or at the bargaining table.”

This is a developing story and will be updated as negotiations progress.

We’re hearing from Catholic Health President and CEO Mark Sullivan on Day 6 of the CWA strike.