The design is by a team from Rochester and calls for a portion of the Skyway (south of the Buffalo River) to be turned into a park. 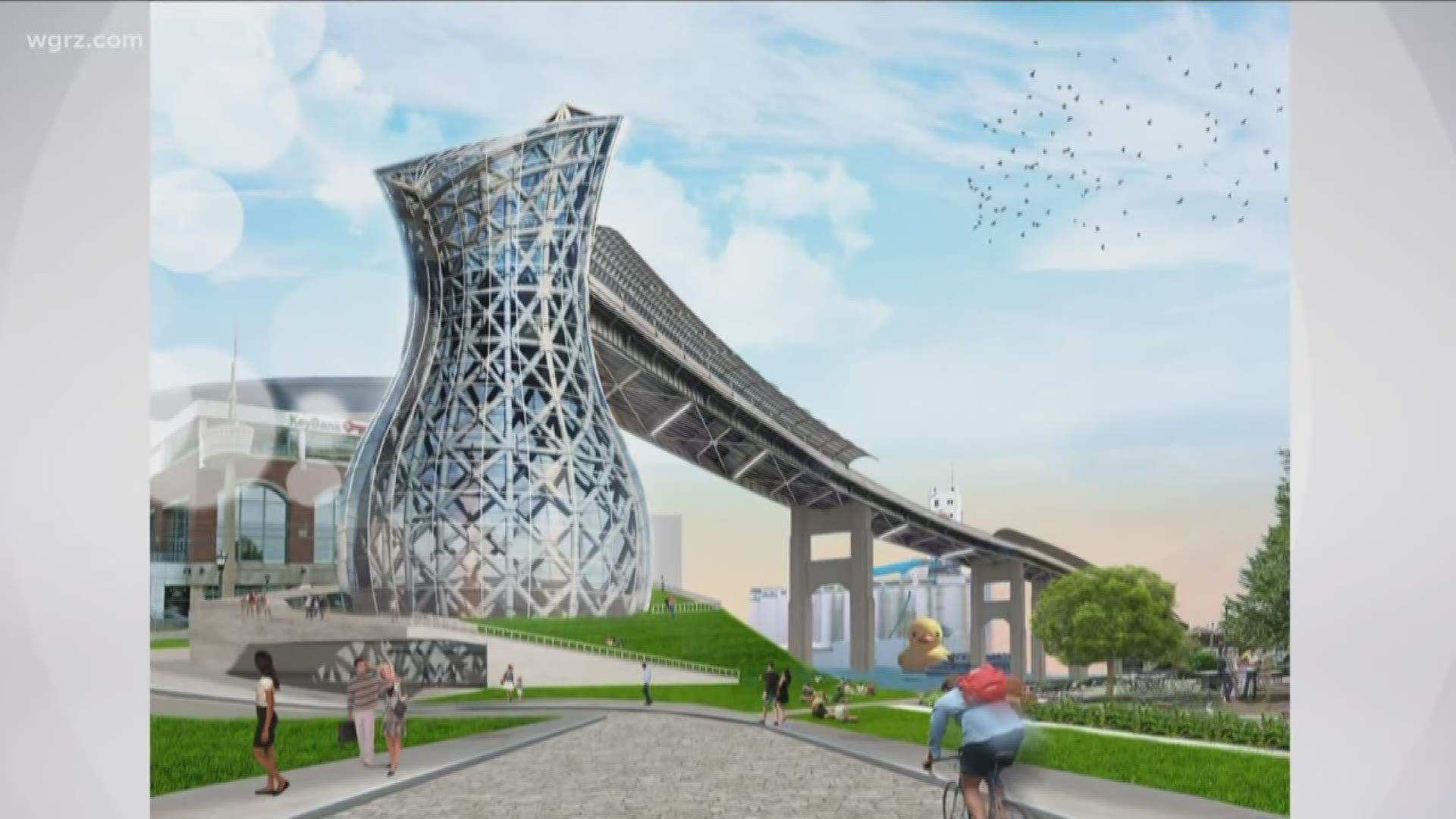 BUFFALO, N.Y. — The "City of Lights" design by a group from Rochester is the winner of the Buffalo Skyway redesign contest.

The announcement was made on Tuesday afternoon after a panel of state and local officials settled on the plans submitted by SWBR Architects, which bested several others submitted as part of a contest sponsored by the State of New York.

"We kind of knew what would work and what wouldn't," said Bill Price, a landscape architect with SWRB, which has done some Western New York projects in the past. Price acknowledged that this may have given their efforts an advantage over others submitted from groups across the country, who might not have been as familiar with Buffalo.

"We kind of knew what proposals have been made here before, and which ones  moved forward and which did not," Price said.

Their $300 million dollar proposal called City of Lights, would see the portion of the Skyway north of the Buffalo River torn down.

"This would allow Canalside to become the fullest it could be," said Price.

The remaining portion of the Skyway south of the Buffalo River would remain, but would be turned into an elevated park accessible to pedestrians and bicyclists.

"This is going to let people view the skyline of Buffalo in a way that they have never been able to see it before...and we were able to break down the barriers that separating the waterfront from the community and the individual neighborhoods around it," Price said.

With the Skyway, as proposed under the plan to no longer be a vehicle bridge, traffic would access downtown through a new low level lift bridge at South Michigan Street according to Price, who said his team believes the Skyway will not be missed in that capacity.

"We know that we can distribute all of what's currently there, but we also think over the next 20 to 30 years that type of commuter traffic is going to start to wane and dissipate, because there won't be as much (traffic) as people start to live more in downtown, Canalside and some of the (housing) hamlets that we're designing," Price said.

What is the reality?

There is no guarantee that the future of the Skyway — as now envisioned as the result of a splashy contest — will ever become reality.

And even if City Lights were to come to fruition it might not be for many years, as New York State just spent close to $30 million to repair and resurface the Skyway to extend its use into the foreseeable future.

Nonetheless, in addition to having spent $175,000 in prize money for the design contest, Governor Andrew Cuomo pledged $10 million more from the state to help fund the environmental studies, which would be a necessary first step for any eventual effort to re-purpose the Skyway.

According to Empire State Development's Howard Zemsky, the state would seek federal dollars to cover 80 percent of the cost of a re-purposed Skyway.

That would mean, in the case of the $300 million which Price and his team estimate their City Lights proposal would cost to build, New York would be asking for $240 million dollars from Washington, while trying to scrape up the remaining $60 million.

Meanwhile, Price and his group are $100,000 richer for submitting the winning design, whether it's ever built upon or not. Although he hopes it is.

"We certainly do," said Price, who lives in the Rochester suburb of Brighton, but  carries a certain affinity for Buffalo.

"We have been in this area all of our lives and my kids went to school here at the University at Buffalo. I also got married here," he said, noting that his wife hails from Buffalo.

"So we have cared about this community for a long time," Price said.