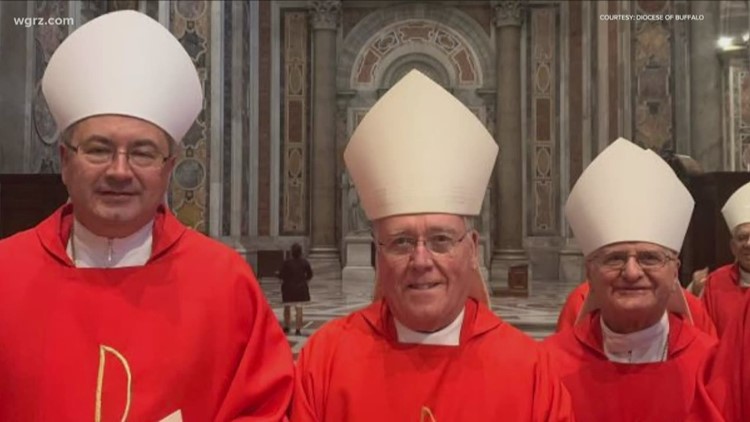 BUFFALO, N.Y. — Back from a trip to the Vatican for less than a day, Buffalo Bishop Richard Malone Monday released a video statement addressing the trip.

In it, the leader of WNY's Roman Catholic diocese says the report put together on the Buffalo Diocese priest sex abuse scandal has been handed over to the Holy See. Malone would only say he would have more information on that at a later time.

By releasing a video, Bishop Malone was able to share his thoughts about his trip without taking questions from reporters.

When Bishop Malone returned to Buffalo on Sunday following his "ad limina" visit to the Vatican, protesters and the media were waiting for him at the Buffalo airport.

He never encountered those protesters or our cameras. Instead, Niagara Frontier Transportation Authority (NFTA) officials whisked the bishop away, unseen, through a side door upon his arrival following a weeklong visit to the Vatican.

The bishop's return to Western New York comes days after a report said Bishop Malone was on the verge of resigning.

The Diocese of Buffalo last week denied that report.

Christopher Lamb, the Rome correspondent for The Tablet, a Catholic international weekly publication, tweeted on the morning of November 13 that he heard from sources that Bishop Malone's resignation was in the hands of Pope Francis.

The next day Diocese spokesperson Kathy Spangler, speaking for the bishop, said the resignation tweet was "false." At the time, Spangler added that he would talk about his trip "next week."

Bishop Malone was in Rome for a weeklong "ad limina" visit to the Vatican, which ended on Friday with meeting among all the bishops from New York State and Pope Francis.

For much of the past two years, the Bishop has been under a near-constant barrage of criticism for his handling of the clergy sex abuse scandal within the Diocese.

Bishop Malone has consistently said he would not resign. He told 2 On Your Side investigative reporter Steve Brown that he plans to maintain his commitment to the Diocese unless the Pope asks him otherwise.

"I think that if in fact the Holy See, if the Vatican, were to do a review of the situation, something I would be very open to by the way," Bishop Malone said on September 18. "If the report came back from Rome that the Holy Father thought I should resign, then that’s, of course, something I would, out of obedience, do immediately."