WGRZ-TV has been involved with Erie County's effort to help with awareness of mental health issues with the Anti - Stigma Coalition. And there's a realization that it's not just adults but also younger people who must also cope with certain conditions. That's why more Western New York schools like those in the Iroquois School District are now bringing in counselors to help their students deal with anxiety. 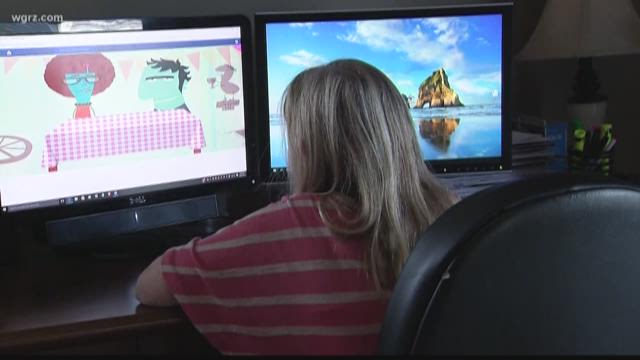 ELMA, NY — WGRZ-TV has been involved with Erie County's effort to help with awareness of mental health issues with the Anti - Stigma Coalition. And there's a realization that it's not just adults but also younger people who must also cope with certain conditions.

That's why more Western New York schools like those in the Iroquois School District are now bringing in counselors to help their students deal with anxiety.

"The parent called and said I'm here in the parking lot but he won't get out of the car and I don't know what to do," Yount said.

That's an example of what school administrators, teachers, and counselors fear is a growing trend. That is students suffering from the sometimes incapacitating effects of anxiety.

Two students, who we are not identifying, shared their feelings of stress.

Another said, "It makes me nervous to walk into school and you don't know what you're gonna face for the rest of the day."

While it may be hard to quantify, it's estimated nearly seven million adult Americans suffer from severe anxiety disorders, according to the Anxiety and Depression Association of America. And now studies also cite one in five children in the U.S. have mental health needs, including severe anxiety. Others who directly observe in the hallways and classrooms feel it may be worse and that girls and boys both try to hide it.

"I think that out of every two kids walking down that hall, one of those kids is struggling with anxiety," school social worker Colleen Edwards said.

Iroquois Superintendent Douglas Scofield recognizes the impact. He compares it to a hidden injury— inside the mind.

"It's a deeply cutting wound that immobilizes somebody very greatly…like a broken bone…but with the proper attention to it…it heals and people can be very functional," Scofield said.

That's why the Iroquois District, which has also picked up the use of therapy dogs in school, has now joined other districts in bringing a Gateway Longview mental health counselor into the school one day a week. They provide an hour long counseling session for referred students in need. Costs are covered by the parents' private health insurance or other arrangements are made with direct parental involvement.

2 On Your Side asked counselor and clinician Jillian Field, "Some people out there are gonna say awe c'mon, kids just have to grow up – this is part of growing up. They have to learn how to deal with these things cause let's face it, you gotta be tough to deal with the real world. What do you say to those people?

Jillian: "I think the real world is significantly different that it used to be and so in order to face it and deal with it you have to adapt and this is a way that we're adapting to help the children to provide this counseling and therapeutic services."

Field specializes in art therapy, saying it provides a unique window into a child's mind and a connection.

Obviously bullying and the sometimes corrosive effects of social media are well documented with the impact on teens and even younger children. But it's not always the anticipated targets for anxiety, according to Edwards

"When I have worked with the valedictorian, the salutatorian or I've worked with kids that are…look like they're popular…those are the kids that actually struggle the most," Edwards said. "A lot of times, they have to keep up appearances and that causes then a great amount of anxiety as well."

We also asked Field if she was seeing even younger children in elementary schools who are affected by anxiety. She replied, "Absolutely. Most people don't realize that it presents differently in younger children – anxiety does. But I think because it's become more of a conversation. I think some of these teachers and social workers are becoming aware of these cues and referring the kids at a younger age because the earlier we can intervene the more effective it is."

The Iroquois School District hopes to expand the program to provide counselors for all their schools in the future.

Gateway Longview runs counseling programs for students with anxiety issues in about 30 schools in Western New York. That includes the Buffalo Public Schools and Sweet Home.