Who is Jenny B and how did she get your address?

Women are getting notes and gift cards congratulating them on their pregnancies. They're not pregnant, but here's why they (and their parents) are getting the mail. 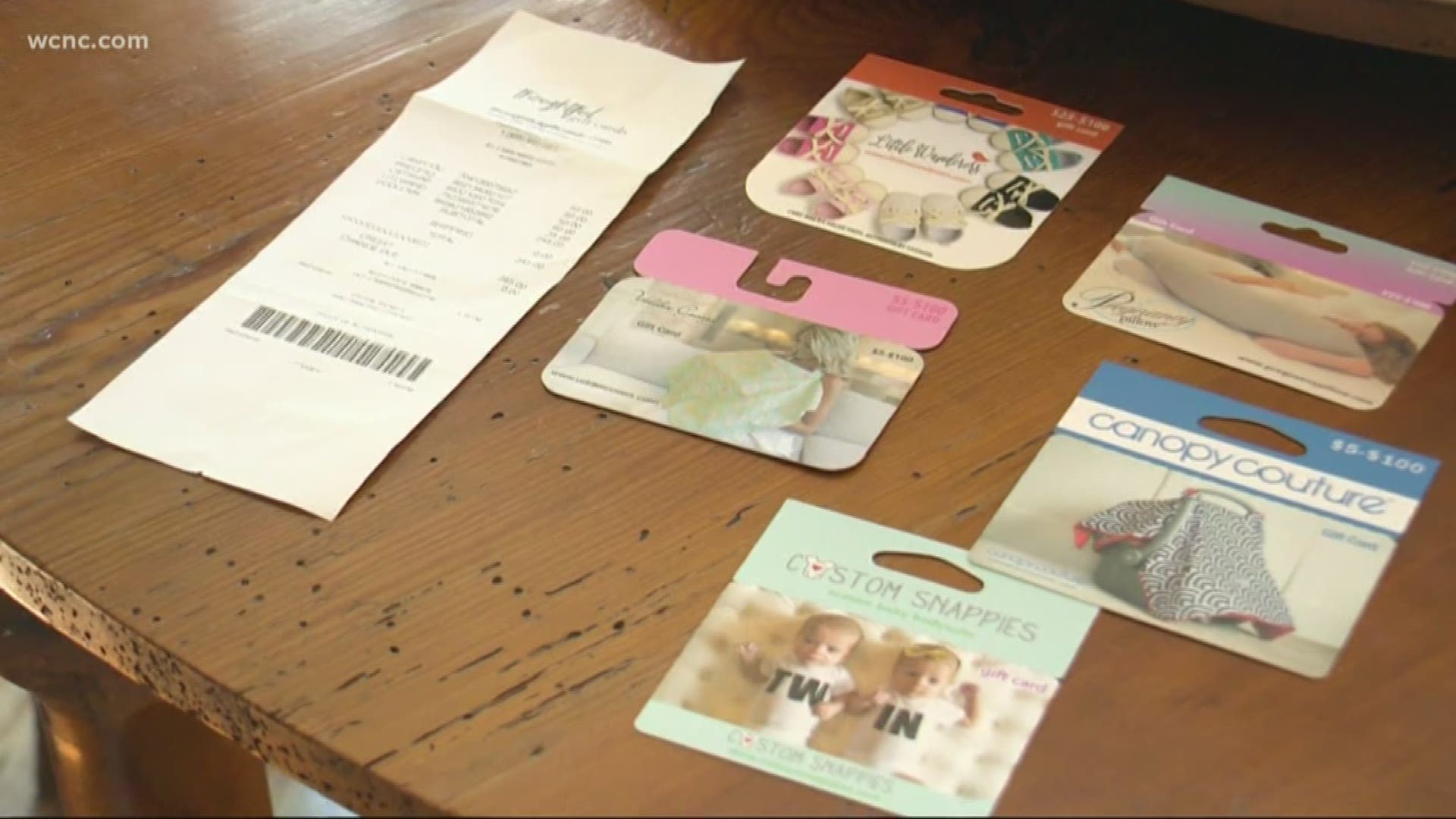 CHARLOTTE, N.C. — Women across the country (and their parents) are opening their mail to find handwritten notes and gift cards congratulating them on their pregnancies, all signed by Jenny B.

Not only is the sender a complete stranger, but many of the women are not pregnant.

Rick and Libby Ballew don't have grandkids and didn't expect to have any grandkids any time soon, but then a card addressed to their daughter with no return address arrived at her childhood home.

"Holy guacamole! You're going to avo baby!" the card said. "Congratulations!!! I'm so excited for you! I hope you like these. heart, Jenny B."

Inside, there were more than $200 worth of gift cards, plus coupons, for baby items.

Naturally, they immediately reached out to their daughter while at her job in her new hometown of San Francisco.

"I was like so confused. I was generally in shock," Anna Stratton-Brook said. "I just felt a little violated. I was just like, 'How did my entire day get completely turned upside' and like now, instead of doing my work and going on with my day, one I'm trying to defend the fact that I'm not pregnant to my mom and two, trying to figure out, 'Who is this person who has my address?'"

Women across the country have spent recent weeks wondering the same thing. The gifts cards are connected to a Utah company called Mothers Lounge. The business told us millions of families have ordered from its brands since its creation in 2005, founded, in part, by a woman named Jenny Bosco, Jenny B.

The BBB gives the company an F rating.

"They're a legitimate business. They are having some issues," Better Business Bureau of Southern Piedmont and Western North Carolina President and CEO Tom Bartholomy said.

Bartholomy said the BBB's received 25 complaints in the last year-and-a-half and an equal number of customer reviews, including questions about the company's marketing and advertising tactics.

"We looked into it and it seemed, at least in some level, misleading," he said. "The merchandise that they're getting is inferior or some are saying counterfeit. If you're getting these gift cards, they seem to be used and then just recharged and so, what is the true value on these? Then the shipping fees that they're charging are much higher, $10, $15, $20 per item than what people are normally used to spending. They finally see that it's $12 for it to be shipped to you and you get it and it turns out not to be exactly what it was pictured like and that's leading to the complaints of 'I feel like I've been misled. I've been taken.'"

The BBB called out Mothers Lounge for questionable marketing earlier this year and asked the company to discontinue sending gift cards, that, when used, require people to pay shipping costs, among other concerns.

The Ballews didn't take any chances, but the mysterious card threw their entire family for a loop.

Mothers Lounge would not address the BBB's concerns, but in a statement did answer the most pressing question. How did this company get so many women's information?

"Mothers Lounge has mailed a heartfelt note which includes gift cards with proof of activation, and coupons to new mothers," the statement said in part. "The qualified recipients for this mailer have, at one point, subscribed to an opt-in list for maternity deals and coupons through a third party marketing company. All information from third party companies is only used internally for Mothers Lounge and is not sold or used for anything else other than the direct marketing of Mothers Lounge. We are very grateful for all our customers."

In this case, Stratton-Brook doesn't recall ever knowingly opting in.

"I do not recall that," she said. "I'm not sure when that would have been because I've lived in California for three-and-a-half years and would never give Charlotte as my address."