Texas may thaw after a deep freeze, but the ripple effect causes issues for a WNY manufacturer

Confer Plastics has seen a significant reduction in raw material shipments since the Texas deep freeze, and its president says it may hit consumer shelves in weeks. 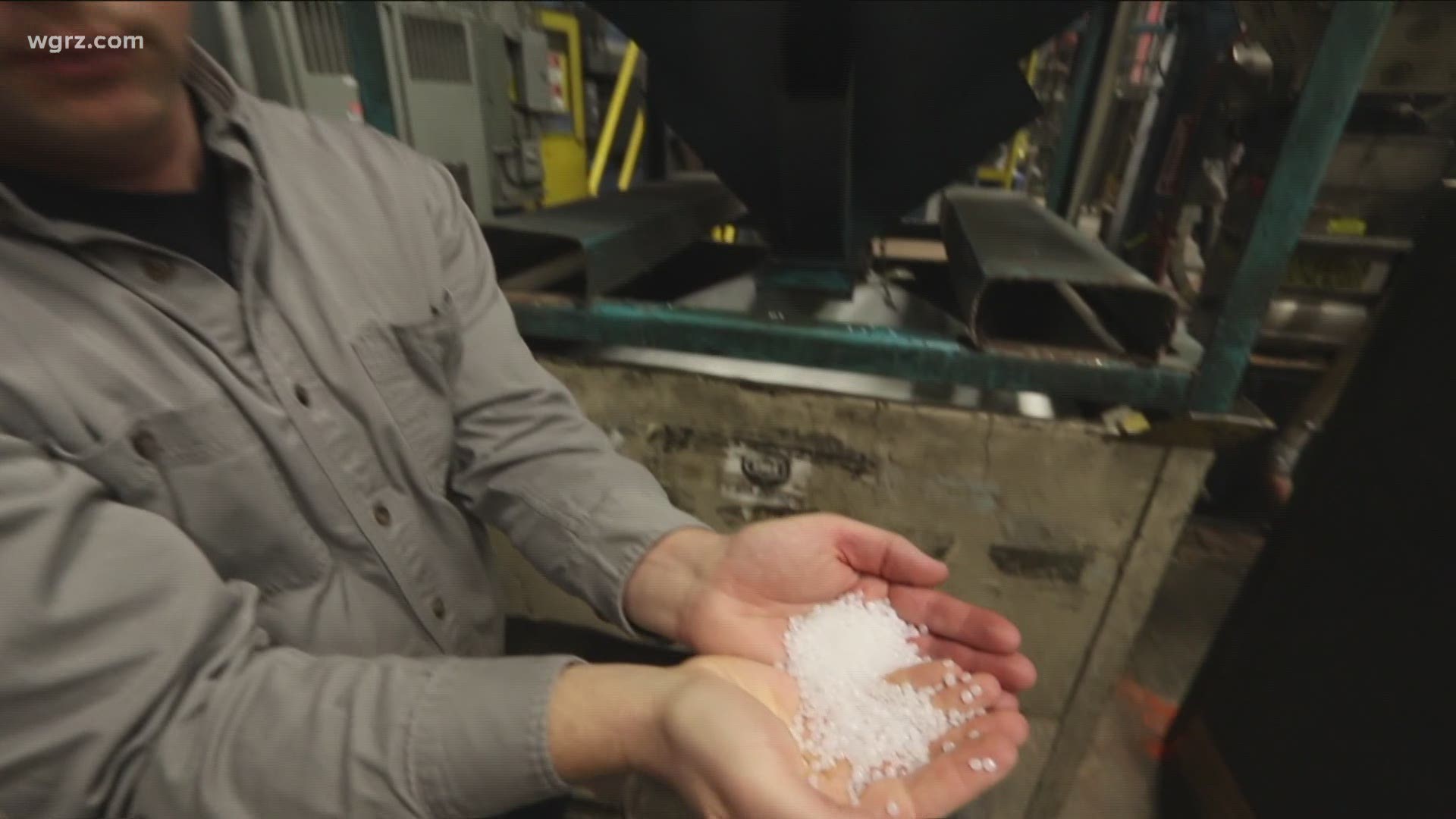 NORTH TONAWANDA, N.Y. — There are reports as recent as Wednesday that Texas is still reeling from the effects of the deep freeze several weeks ago. Reports of electrical and water issues for thousands of residents across the state are still coming in.

Now some of the ripple effects of the deep freeze are making their way to western New York and impacting manufacturers.

"This is going to be a significant loss of business for us," said Bob Confer, president of Confer Plastics in North Tonawanda.

While the parking lot is full of staff vehicles today, the outlook for Confer Plastics isn’t good as its management thought it would be.

"It's going to be a dramatic downturn over what was supposed to be really good times for us," Confer said.

So the deep freeze in Texas is over and everything is fine?

The ripple effect of industry shutting down for weeks in Texas is now having an impact on manufacturing in WNY, and it could result in store shelves being emptier in a few weeks.

Confer Plastics specializes in pool & spa products, along with other plastic goods. With the COVID-19 restrictions in place and more people staying home, business for Confer Plastics wasn't as bad as other industries during the pandemic.

The Texas deep freeze several weeks ago changed the outlook for their year over the course of a few days.

"The polyethylene plants that provide our material didn't get notice usually like hurricanes," Cliff Hoover said. Hoover is the General Manager of Confer Plastics. "They [normally] have a notice that they can shut the plants down properly.

Hoover says that even though the deep freeze was forecasted, the polyethylene facilities didn't have enough time to properly shut down.

"Polymers get stuck inside the pipes actually freeze up and gel up inside," Hoover said. "So in those situations, they almost have to go through the whole thing and clean it back out to get production started again."

The majority of Texas-based petrochemical plants are still shut down. Only some of them began operations this week and it will still be a slow crawl to ramp up production before the freeze.

According to an S&P Global report, at its height, the deep freeze in Texas took about 75% of 40 million metric tonnes per year of U.S. ethylene capacity offline.

Even though Confer Plastics has some source material from other parts of the country, the bulk of their supply comes from Texas.

"We'll be out of material," Hoover said. "High-density polyethylene is what we make our materials out of, so the commodity that we use will be gone."

Hoover says the supply issues could last for the rest of 2021.

"They can't make up manufacturing time, just like we can't," Hoover said.

That would mean reduced production and ultimately difficult staffing decisions.

"We have laid off people. That's a moving situation." Hoover said. "I see this getting worse before it gets better."

But there could be a bigger problem looming from the Texas deep freeze: consumer goods inventory issues.

About 85% of the polyethylene made in the United States comes from Texas.

Why does that matter to you? Because polyethylene is the most widely used plastic in the world, and without those Texas plants shipping it’s out, you’re going to start seeing plastic shortages, and potentially empty shelves at the store.

"When a problem like the cold weather in Texas pops up, it has an echo effect, if you will, like a pebble into a pond," said Jack Ampuja, Executive Director of the Center for Supply Chain Excellence at Niagara University.

"We're being affected because of products coming up from Texas."

While Confer Plastics receives a lot of their raw material via rail lines, Ampuja says trucking coming in and out of Texas is at a near standstill. Nothing going in, nothing coming out.

"For truckers, the issue is that they make money by driving," Ampuja said. "If they're sitting in waiting, or being delayed, or having to drive miles and miles without freight, they're very reluctant to pick up freight."

Ampuja says companies are looking at a more regional approach now to supplying the country with raw materials, mainly as a result of more and more "100-year events" happening more frequently.

Confer says a new resin facility will be opening up near Pittsburgh in two years that, in the future, will help them diversify their sourcing of raw materials.

But while he waits for that facility to open, Confer has had to make some tough business decisions.

"We've gotten to the point right now of declaring force majeure, which is basically washing our hands of contractual obligation when it comes to delivery time and prices," Confer said. "This is an act of God beyond us."

Confer says the 48-year-old company has never been forced to enact a force majeure with a client.

That's with dealing with the blizzard of 77, oil embargoes, COVID-19, the Great Recession. Never had to declare that before," Confer said. "We've done it because of this event."

But long-term, Confer sees the writing on the wall for consumers in the coming weeks.

"Consumers are definitely going to see a shortage in consumer goods," Confer said. "That could be food stuff because the packaging is going to be missing, it could be cleaning wipes, things like that, that are needed for cleaning up for COVID-19, because you won't have containers in which to store them."

In the grand scheme of manufacturing in the United States, Confer Plastics, while a staple in WNY, is a smaller player and doesn't have the buying power like a medical company or other large consumer goods manufacturer.

Ampuja says the supply chain will take significant time to catch up to the Texas freeze.

"The electricity is already turned on in Texas," Ampuja said. "But this is not going to be a one or two-day recovery, it's going to be several weeks before things begin to smooth out."