A meeting was held at the downtown Hyatt Regency Buffalo. Schultz said 'my purpose here has been to listen and learn' from Western New York employees. 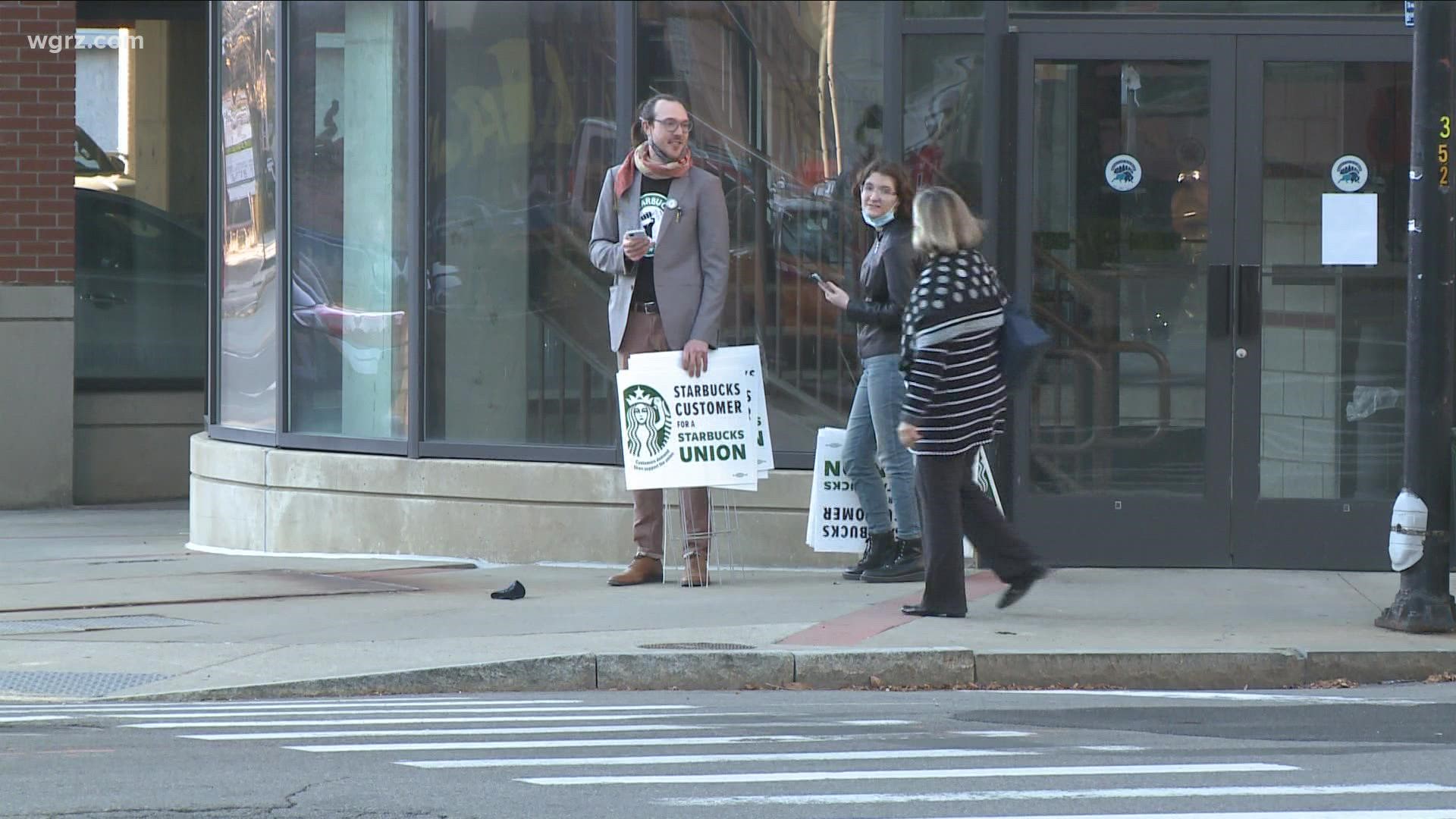 BUFFALO, N.Y. — If you noticed that Buffalo-area Starbucks locations closed early Saturday, there's a reason for it.

Former Starbucks CEO Howard Schultz was scheduled to speak to local Starbucks workers from 5 to 7 p.m. at the downtown Hyatt Regency Buffalo, according to organizers trying to start a local Starbucks union.

Buffalo-area Starbucks closed at 3 p.m. on Saturday. Schultz issued a statement on Saturday, titled "From Buffalo with love." In the post, he detailed what he hoped to do during his visit to Western New York.

"Since my last trip here to meet with Store Managers in September, I have had the great privilege of hearing deeply personal stories about our Buffalo partners’ own journeys," Schultz said.

"My purpose here has been to listen and learn. And to share with our partners – so many here who are new to the company – about the values and principles that have served as our foundation."

Starbucks employees posted signs around the venue. A man was later seen removing those signs. No media was allowed in the building.

The Starbucks Workers United posted Saturday afternoon on Twitter that it learned of Schultz's planned appearance through a video sent to workers by Deanna Pusatier, who serves as a regional director of operations, It was also shared on social media.

"Hey partners, super excited to see you at our partner event on Saturday," Pusatier says in the video. "Oh, and I just found out who our special guest is. It's our very own Howard Schultz. See you there."

"In thirty minutes, Starbucks is shutting down all of its Buffalo stores, telling partners to go to an event with Howard Schultz. How do the shareholders feel about losing all that revenue in what is typically our most profitable launch/earnings quarter?" the post said.

A Starbucks spokesperson told 2 On Your Side last week, in part, that they remain focused on supporting their partners as well as maintaining open, transparent, and direct conversations throughout the process. The company is evaluating its options.

A week after the three locations mentioned above announced they would like to unionize, two more expressed interest in unionizing as well. Those locations were at Walden and Anderson in Cheektowaga and at Transit Commons.

The Elmwood, Camp Road, and Genesee Street Starbucks locations filed a petition in early September with the National Labor Relations Board to officially hold union elections.

Posters and handouts announcing the event have been in stores across Buffalo for days. However, Starbucks corporate felt the need to notify partners about this again -- in the wee hours of the morning -- by email and text, letting us know it's Howard. pic.twitter.com/JDlyqqynUr