But the bill is stalled in the Ways and Means committee; Congressman Brian Higgins sits on that committee. 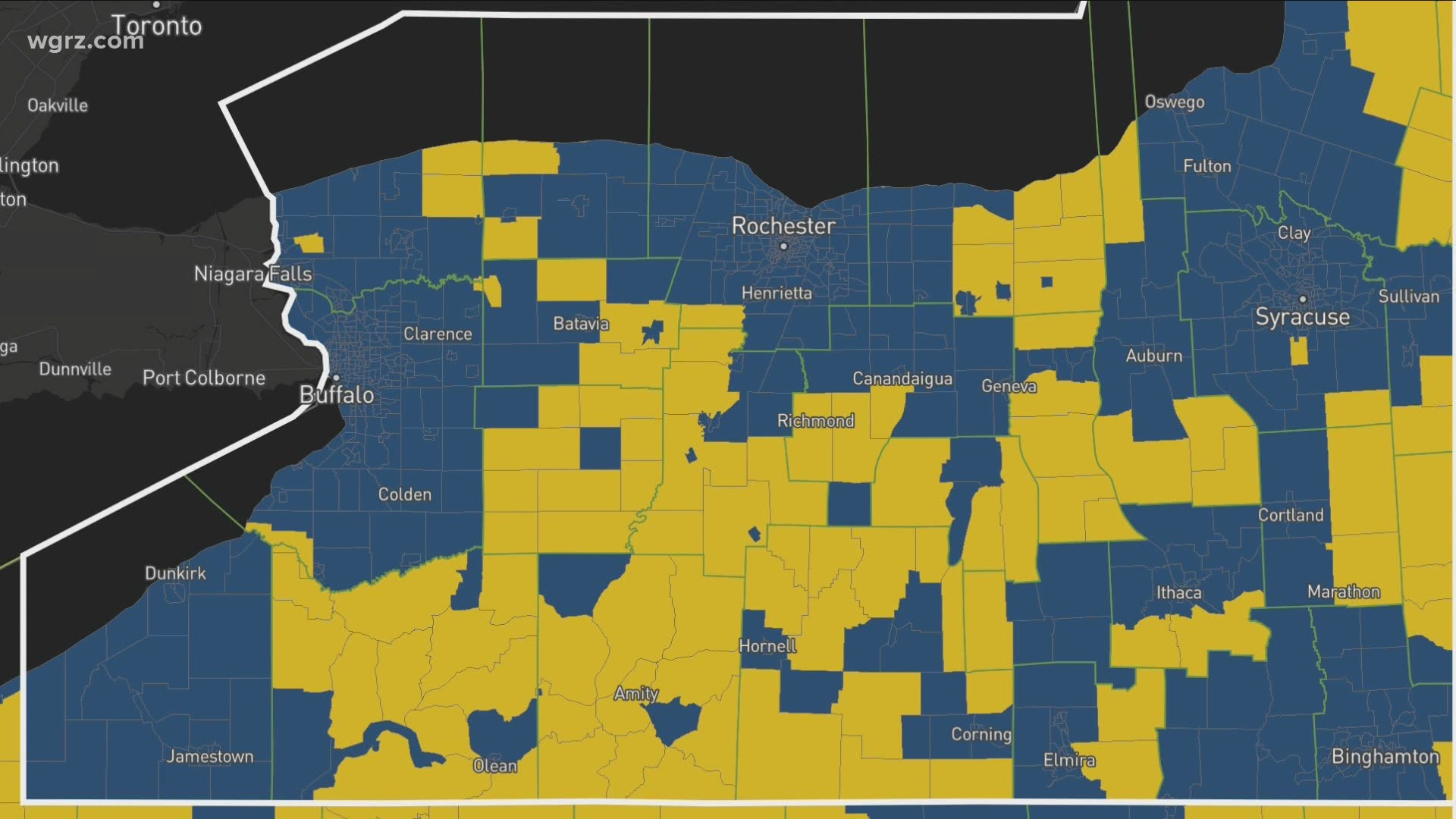 On Thursday, Federal Communications Commission Chairman Ajit Pai held a virtual fireside chat where he discussed the topic of bridging the digital divide, a problem that became even more abundantly clear in Western New York during the pandemic.

"I think the pandemic has really focused public attention writ large on the importance of broadband, and that is filtered into Congress," Chairman Pai said. "We're seeing elected officials from both chambers of Congress, both parties, really talking about conductivity and solutions to get us there."

As 2 On Your side has been reporting for months, there’s a broadband problem in Western New York. An American Community study indicates nearly 20% of buffalo residents don’t have access to broadband. The New York State Broadband Program is riddled with incomplete projects, fee disputes and delayed freedom of information requests.

Residents in suburbs and rural communities had to use library parking lots during the pandemic to try and connect to a Wi-Fi signal. 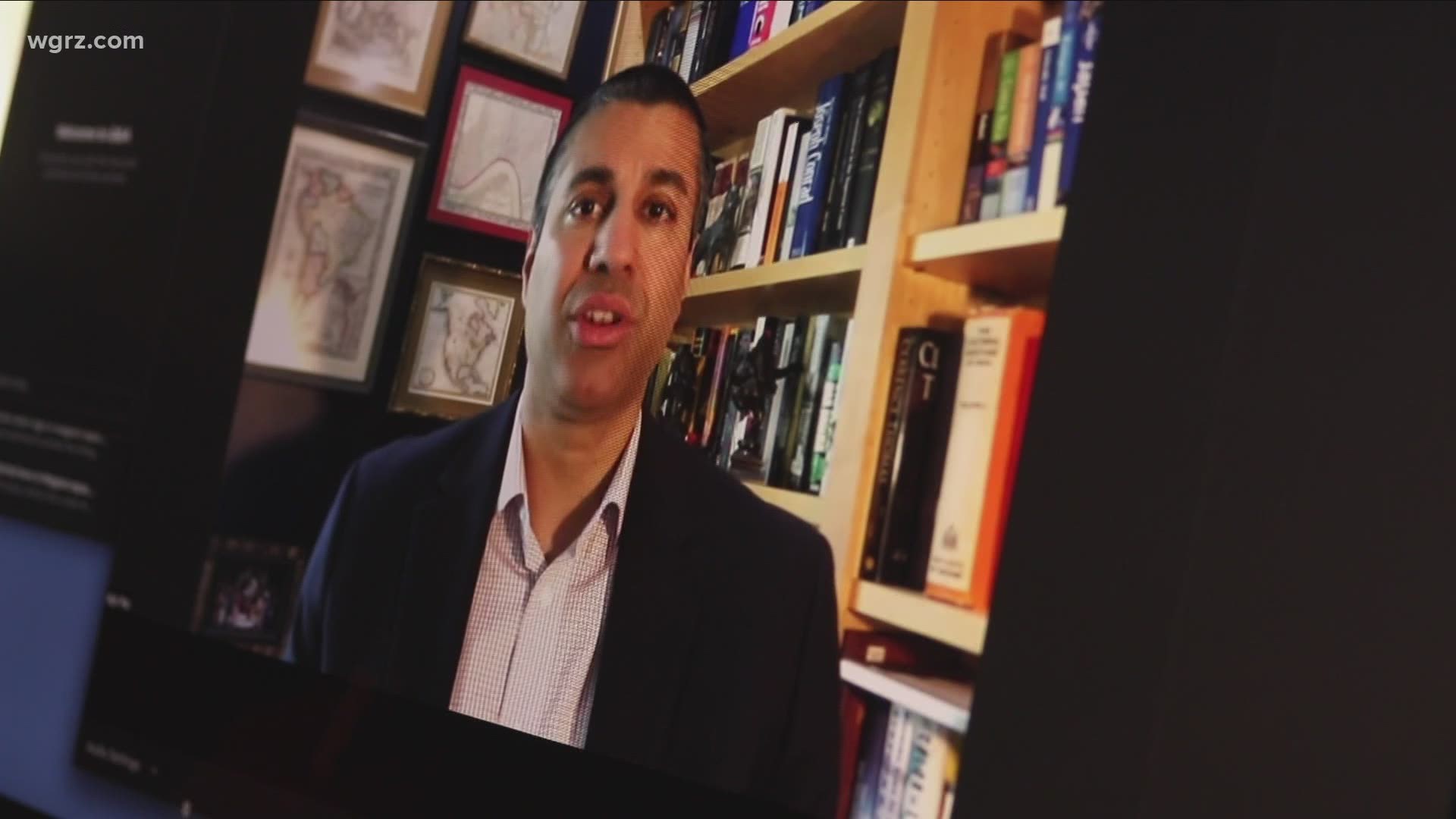 Buffalo Public Schools handed out hundreds of hot spots in a desperate attempt to keep kids connected and engaged with their school work.

The City of Buffalo missed out on the Verizon FiOS build out a decade ago, and only sporadic suburbs received that service.

Western New York has historically missed out on opportunities to get out of the digital black hole, either because of regulations, lawmakers, or service providers unwilling to serve the community.

2 On Your Side was allowed to ask Chairman Pai one question during this webinar, which was hosted by Phillips Lytle attorney Joel Thayer. Using the above information we asked the Chairman the following:

How can the FCC ensure these people [in Buffalo] won’t be continuously left behind as technologies shift?

Below is his part of his complete answer:

"A great question and I was born in Buffalo, I'm actually excited about a firsthand appreciation of the challenge that Nate is talking about. So over the past three months, we've taken a lot of steps to ensure that school kids like that are able to get conductivity, for example, we've expanded the opportunity for people to get into our lifeline program, which provides high-speed broadband and other services to low-income consumers.

We've also streamlined the process for schools to solicit and accepted for service providers to offer broadband conductivity and devices and Wi-Fi hot spots in the light the problem we have faced at the FCC over the last three months is that the statute that enables us through our E-rate program to subsidize conductivity to schools and libraries, and school kids and library patrons is limited to services to classrooms.

It uses those very specific words, services, and classrooms. That's why early on over three months ago, I sent a letter to Congress urging them to keep the FCC the authority and the funding to set up a remote Learning Initiative to direct funds to those urban school districts in particular that were low income to get those hot spots into the hands of consumers who couldn't otherwise afford them to enable broadband to reach those consumers.

Unfortunately, that didn't happen. Congress didn't give us the authority to set up a telehealth program. So we have set up a program to get telehealth to those same consumers. But we haven't seen as much action on the educational side. I hope that changes. In the meantime, looking forward, what I want to do is to make sure that we close that digital divide.

We have a $20 billion program called the Rural Digital Opportunity Fund to get unserved parts of the country serve. We've done a lot of other regulatory reforms to benefit urban consumers. Such as it is an arcane reformed, it's called one check to make ready to ensure that the cost of getting access to utility holds a string of fiber line is significantly lower and much quicker.

That's going to be a big game-changer, especially in urban areas where it might be difficult to build a broadband network. So there's a lot of other stuff going.

But what I will say is that we would love for Congress to take some of these proposals I put on the table and run with them. I want to pick one that I'll mention is called gigabit opportunity zones. It was tailor-made for places like buffalo. In fact, it was inspired by former buffalo congressman Jack Kemp. And the idea I had for years ago was to set designate an urban area, for example, a couple of urban blocks or an entire neighborhood where the median income was 75%, or lower than the national median, and say that internet service providers would get tax breaks for building high quality, high-speed infrastructure in those areas. That would be an easy way of ensuring that you don't see these, you know, blanks essentially when you're creating a broadband map of conductivity in urban areas."

The proposal Chairman Pai is referring to is H.R. 5082 - the gigabit opportunity act.

In a nutshell, if an area didn’t have FCC defined broadband speeds and was designated a low-income census block, an internet provider could receive tax breaks or credits. But in its current form, the bill doesn’t outline the quality of service that providers would need to offer.

A version of this bill failed during the 115th congress, and an updated version is currently stalled in the ways and means committee.

2 On Your Side reached out to Congressman Brian Higgins' office because he sits on that committee. We wanted to know why the bill is stalled in committee, it was proposed in November.

His office didn’t respond to our request for comment.

There are broader issues when it comes to the willpower to deliver broadband to everyone.

Credit: FCC
A look at broadband access across the U.S. using the FCC mapping data. This map indicates all broadband available in the country meeting the >25Mbps standard. Satellite internet data is not included in this map due to WGRZ's inability to measure speeds that meet FCC standards.

Credit: FCC
A look at broadband access across Western New York using the FCC mapping data. This map indicates all broadband available in Western New York meeting the >25Mbps standard. Satellite internet data is not included in this map due to WGRZ's inability to measure speeds that meet FCC standards.

No one disputes that broadband is a luxury, and the pandemic highlighted the fact that it's needed to succeed in almost every aspect of daily life.

Chairman Pai echoed that sentiment earlier in his remarks:

“So for those Americans who have not been able to benefit from it, we want to make sure going forward that to the maximum extent possible, you're able to get access to do the same things that we use it for it whether it's doing your schoolwork or streaming blast dance or Tiger King, all of these things are only possible because of broadband.”

But how do we do that? One popular idea is making broadband a utility.

Since day one, the free market has dictated where and when areas will get broadband service. For decades it’s been debated whether broadband should be considered a utility, like your gas company. We all know how that works, you have a house, a gas line is run to it and you’re good to go.

Why can’t broadband be the same type of system? Broadband technology is constantly changing, whereas the gas line running to your house was probably installed 80 years ago and still delivers the same consistent service.

The utility or private-public partnership model does exist in several hundred communities in the U.S. Chattanooga, Tennessee, is a popular example. The community there voted to install a community-owned broadband network and they have access to 100mb speeds for roughly $30. That has forced larger providers in that city to provide better service at cheaper prices.

So why isn’t this happening everywhere? It boils down to the fundamental argument about free markets and big government.

“From my perspective, the biggest barrier to employment has to be what you're seeing at the state and local level," said Joel Thayer.

Thayer is an attorney for Phillips Lyttle and operates out of Washington D.C., and was the host of the webinar.

Thayer says a utility system wouldn’t be the same as the electric or gas company and the easiest way for better service to get deployed in communities is for local and state governments to get out of the way.

This is true. 2 On Your Side reported back in November 2019 about some of the inconsistencies the city of Buffalo Department of Public Works was having with regards to permitting fees. Some companies would be charged differently than others. And the inconsistent permitting forced companies to avoid coming to Buffalo,.

But Attorney Martha Buyer is a proponent of public-private partnerships for broadband, similar to the electrification of rural communities in the 20th century; private businesses alone won’t do it.

“A public-private partnership is the way to go," she said. "Nobody is going to pay to build towers to serve a few people, when they can make much more money serving communities that are adequate, and where there's where there's a major demand."

But we’ve highlighted problems with that model as well. The New York State Broadband program remains unfinished, 18 months past its self-imposed deadline

So why is this still a fight? Because the answer isn’t cut and dry, and even those we went right to the top of the FCC know there is a broadband gap.

All people can do is continue to lobby their elected officials for true broadband access for all.

RELATED: Town of Boston residents find it impossible to teach and work from home without broadband