Western New York restaurant and bar owners are pleased, but they remain cautious after the midnight curfew was lifted. 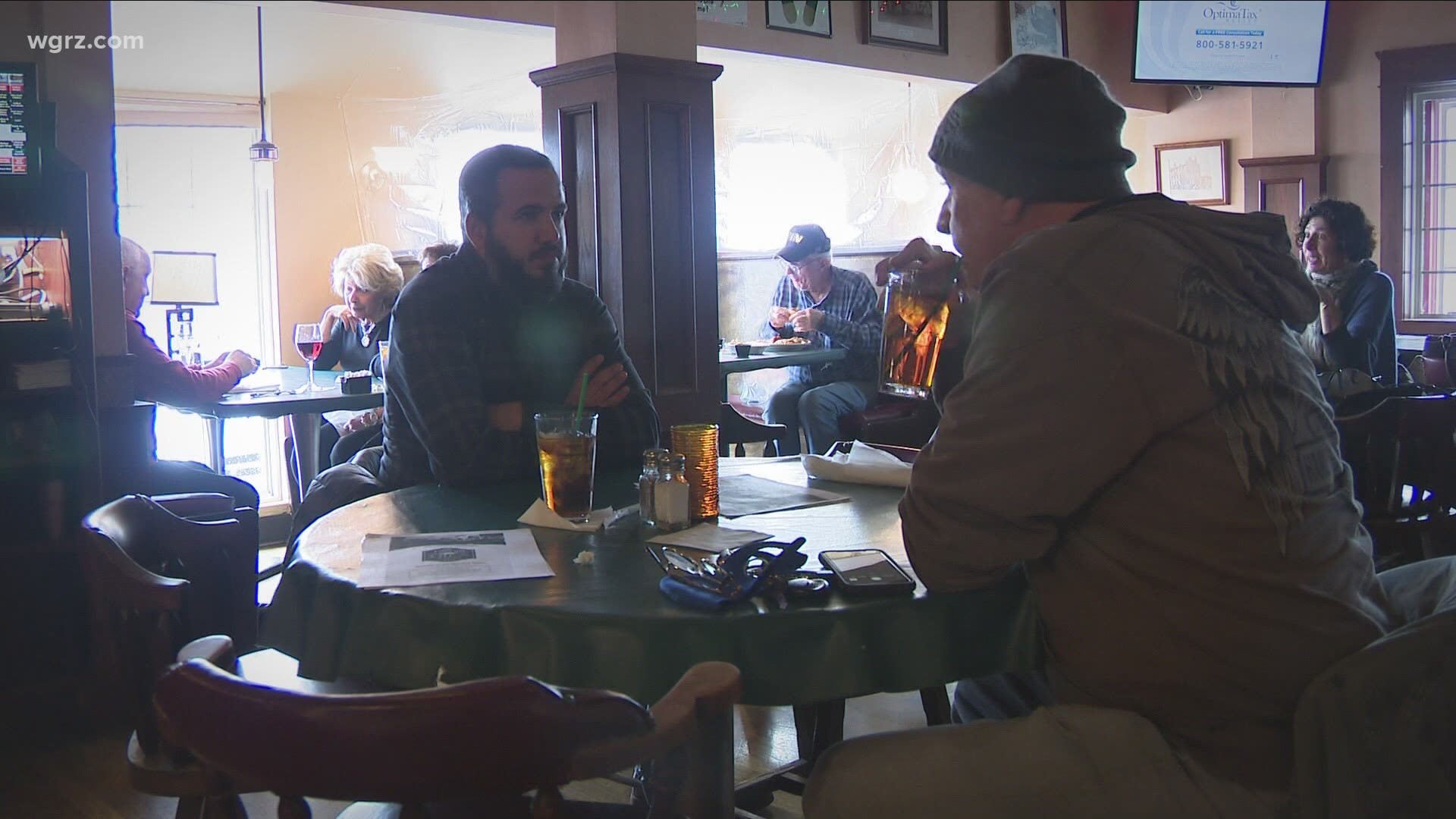 BUFFALO, N.Y. — As we get closer to summer and more places are reopening here in Western New York, there's a better chance now that you'll be able to enjoy a meal at your favorite bar or restaurant with fewer restrictions.

The state announced Wednesday that its midnight curfew for bars and restaurants will go away next month, while state lawmakers also rolled back the mandate that you have to purchase food if you want to buy alcohol.

While social distancing and masking policies are still clearly posted, and you'll find plenty of guidelines still listed, one of the biggest burdens for restaurants will be lifted.

He points out: "It's actually been over a year since we've been at what's called the old normal, and you know, it doesn't seem like we're there yet. But I think by picking those dates, the 17th and the 31st, it's something to be optimistic about. You know Soho, as we talked about before, has been difficult because we turn it into a nightclub. Midnight was really tough."

"We have that guest that's going out at 8:30 , 9 for dinner, we're explaining they can't do that. Now they can," he said. "We still have our guidelines to follow, which we've doing a good job with the people that come in, but very relieved. So glad that that kind of fight will be over."

Officially, the midnight curfew for outside dining on a patio will be gone as of May 17, and for inside dining it's May 31.

It was a fight for Santora and some others who went to court against the state's guidelines, which their attorneys deemed to be "arbitrary and capricious" without scientific evidence, They won only to be reversed on appeal.

Some owners will seek out federal recovery grant funding to get back on their financial footing, including one Allen Street establishment that has been closed since St. Patrick's Day weekend in March of 2020.

Charlie Goldman, who operates the Allen Street Hardware Café, was asked if it will take some time for him to recover financially.

"Well, it depends on this federal stimulus program, the Restaurant Revitalization," Goldman said. "We're looking at getting a substantial amount of money from the government, which is a grant, and it seems like that's going happen.

"If that does happen, that's a huge band-aid on the financial situation, so I can actually work on improving my restaurant and not worry about the financials."

Of course, there are still the distancing, masking, and capacity restrictions, so it's still not a total reopening as yet, so for some, it's a go-slow approach, avoiding the risk of fines or a shutdown, which happened to some last year.

Manno adds he will take a cautious, slow-go approach to full hours.

"We're going do whatever we can to comply," Manno said. "Soho's has been there for 22 years, so I'm not gonna risk any kind of long-term closure or shutdown or suspension because I'm not sure what I'm doing. I'm going to make sure what I'm doing and we're gonna do it to the best of our ability."

Another issue is staffing. Goldman says, "We don't have the staff yet, so I've been working very hard trying to actually con people into coming back. If they're getting $700 a week in unemployment, and you come to work for me and not make that much, they're not going to work."

His staff, which included DJs, musicians, and security for the now-extinct nightclub part of the business, has been cut to a third of what he had.

"My employees, I'm hoping to cut them down to about 10," Goldman said. "And I'm going to start taking some shifts myself, so I'll be behind the bar a couple of days a week, where I have not ever did that. Well, I actually did back in my 20s, but it's been a long time."

Speaking of adjustments, some owners made changes in future planning with the idea it might make it easier if another health issue would ever happen.   There is actually a new patio project, which had been planned before the COVID pandemic, and is now in the works at Santora's business on Transit Road with COVID considerations.

Santora says, "We decided to cover more of the patio. We decided to make it more able to be closed in a little bit, if we needed to with air flow. Certain things that we learned, absolutely."

And to sum up their collective feelings for these businesses without these mandates, perhaps a symbolic weight has been lifted for them.

Goldman reflects: "Yeah, I'm gonna be able to open my business, but what's more important is that the world come back to normal to me. So these are signs of normalcy returning, and for me personally, it looks like I'm going to be able to run my business the way I want to."