BUFFALO, N.Y. -- Each week in our City Shapers segment, we introduce you to someone who is part of Western New York's resurgence. This week, 2 On Your Side's Kelly Dudzik takes us to South Buffalo where families visiting loved ones in the hospital have a new place to stay. 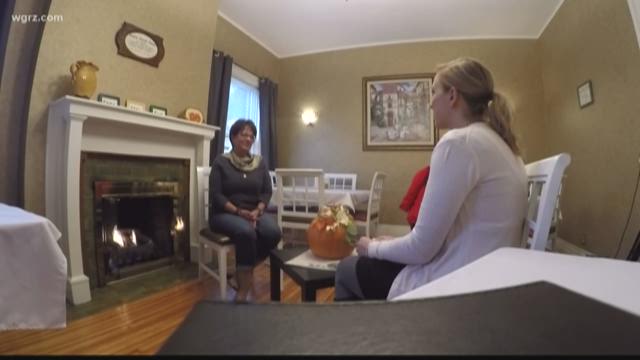 BUFFALO, N.Y. -- Each week in our City Shapers segment, we introduce you to someone who is part of Western New York's resurgence. This week, 2 On Your Side's Kelly Dudzik takes us to South Buffalo where families visiting loved ones in the hospital have a new place to stay.

This week's City Shaper is the founder of Grace Guest House in South Buffalo.

In 2013, Cindy Battista felt a calling to do something for her community that would focus on hospitality. She explored a couple of options, but nothing seemed right.

"Until a colleague of mine came back from North Carolina after his son was in a near fatal motorcycle crash and said, Cindy, I have to tell you about this house we stayed in. And, as he was talking to me at our job where I work full time, I was like, oh my gosh, that's it. That's that thing, you know, it just hit a spark," says Battista.

Cindy got in touch with Mercy Hospital, and the idea of creating a guest house in South Buffalo started coming together. By the spring of 2014, Cindy found three directors for her new not-for-profit. By the summer she had six, and it kept growing.

"We ended up at a property on Abbott Road actually that, for lots of reasons, didn't work out. And, it was exactly at that moment that that property didn't work out that this property went on the market," says Battista.

Grace Guest House is in the former St. John the Evangelist rectory on Seneca Street.

"The families that were here from New York stayed in this room, and the other ensuite, and the room across the hall. So, they had this end of the house. They were together. They were close," explained Battista while giving us a tour.

There is a suggested donation, but families can stay for free. Cindy's neighbor, Kathleen Kelley was on-board from the beginning.

"Yes, and it's wonderful because I like to take care of people,” says Kelley. "And, people need to be taken care of. We needed it once in Cleveland, and it was, somebody was there for us, and it was just something that we needed to do. And, now we're here. It's wonderful because I like to bake, and I like to put food out for people, and that's my job. In the morning, breakfast is ready. You get up, there's coffee, there's juice, there's something to put in your belly before you go to the hospital."

Donations and volunteers are needed, including shuttle drivers to take families from the guest house to the hospital and back. The first guests started arriving in October.

"They would come back from the hospital at night, somebody would have donated a dinner, the fireplace would be on, the table would be set, and they'd just be able to come back, and like, (exhales) just relax, and just get ready for the next day, whatever that might hold," said Battista.

Cindy says the goal is to make Grace Guest House as much like home as possible, and she's already gotten wonderful feedback from the community.

"A lot of them were parishioners here. My kids were baptized next door at the church, and we've taken this rectory and given it back to the community essentially. You know, it means a lot," says Battista.

If you would like to nominate someone to be a City Shaper in 2018, just send Kelly an email.