Mindy Davey is a Musician with a Message

Life is definitely approaching a high note for Mindy Davey, 23, a singer-songwriter from Clarence who will release her first album next month. These days are in stark contrast to another time not so long ago, personified in a track called “The Fall”. 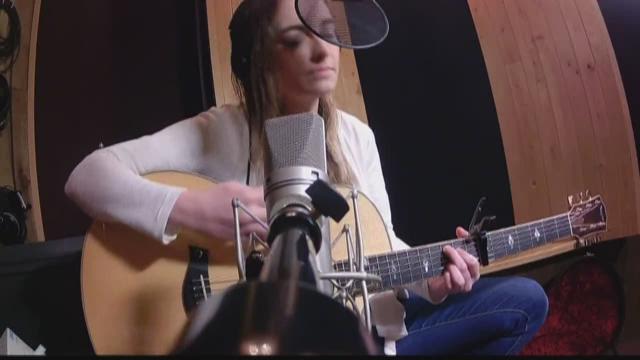 BUFFALO, NY - Since she first opened a guitar case at age 13, singing and playing has come naturally to Mindy Davey.

"I actually don't know any notes on the guitar at all. I learned it all by ear and by sound," she said, while practicing at a studio at GCR Audio, which is owned by Robby Takec of the Goo Goo Dolls.

Life is definitely approaching a high note for Davey, 23, a singer-songwriter from Clarence who will release her first album, Peace, next month.

These days are in stark contrast to another time not so long ago, personified in a track called “The Fall”.

“The Fall is about my recovery. I am four years and five months sober, and I kinda wrote it about my life and my struggles and my addictions but also my recovery and to pretty much raise awareness to other people that are struggling as well," she said.

The Fall, tells the story of a 16 year old girl, somewhat of a social outcast, beset by problems including the severe illness of her mother.

A girl, who made a fateful choice when she went to a party one night with friends.

It is Davey’s own story.

"I kinda took all my emotions from not having anyone to talk to, with my mom going through what she was going through, and it started right at that party,” she said, speaking frankly about the choice she made to take drugs.

According to Davey, her drug use caused her life to spin quickly out of control.

“I had two drugs of choice…opiates, in the form of pain pills, as well as crack cocaine," she recalled.

Soon, her habit lead her to begin taking things, in order to take those drugs.

“I was stealing from my...my family ...and it just got out of control," she said.

Eventually, Davey dropped out of high school. But for her, the fall was far from over.

“For me, rock bottom was when I lost my family. I got kicked out of my house, and my boyfriend at the time, who I was dating for four and a half years, left me. He couldn’t deal with it…and that's when I checked myself into Horizons," she said, referring to a Western New York based treatment and recovery agency.

It was while in re-hab that she soon learned, that she was not going through this alone after all.

“A week into rehab, I was taking my (drug) test, and the lady told me I was pregnant," said Davey.

Davey might have been able to stomach being an addict, but she could not stomach the thought of passing that addiction on to the life growing inside of her….whom she credits, in the song, with saving her own.

“My baby changed my life,” she said.

Her daughter, Arianna, will turn four in July, and Davey is back on track with her relationship with her family, as well as Arianna’s father, the boyfriend she once lost due to her addiction with drugs.

“We’re actually getting married in month,” she beamed.

While Davey was finally able to find her path to escape addiction, she knows there are countless others who have not.

So she recently took her talents and her message to rehab center for young people in West Seneca.

“They came into that room and they didn’t want to be there,” she said. “And to me, I felt a negative energy in the room."

Davey talked to the group, and then played for them, and then noticed that through her music, they began to relate to their own fall, through the story of hers.

“They started hugging me at the end and I could see it in their eyes that I made an impact on them.”

It also made an impact on Davey, so much so that she has agreed to travel to Duluth, Minnesota next month to speak and to sing at four high schools, where she aims to spread a message of hope.

Click on the video player to watch our story from Reporter Dave McKinley and Photojournalist Bob Mancuso.