Jaron Bruzgul died suddenly in May, never living to see the Bills' rise to glory. His friends wanted to make sure that his support of the team was not forgotten. 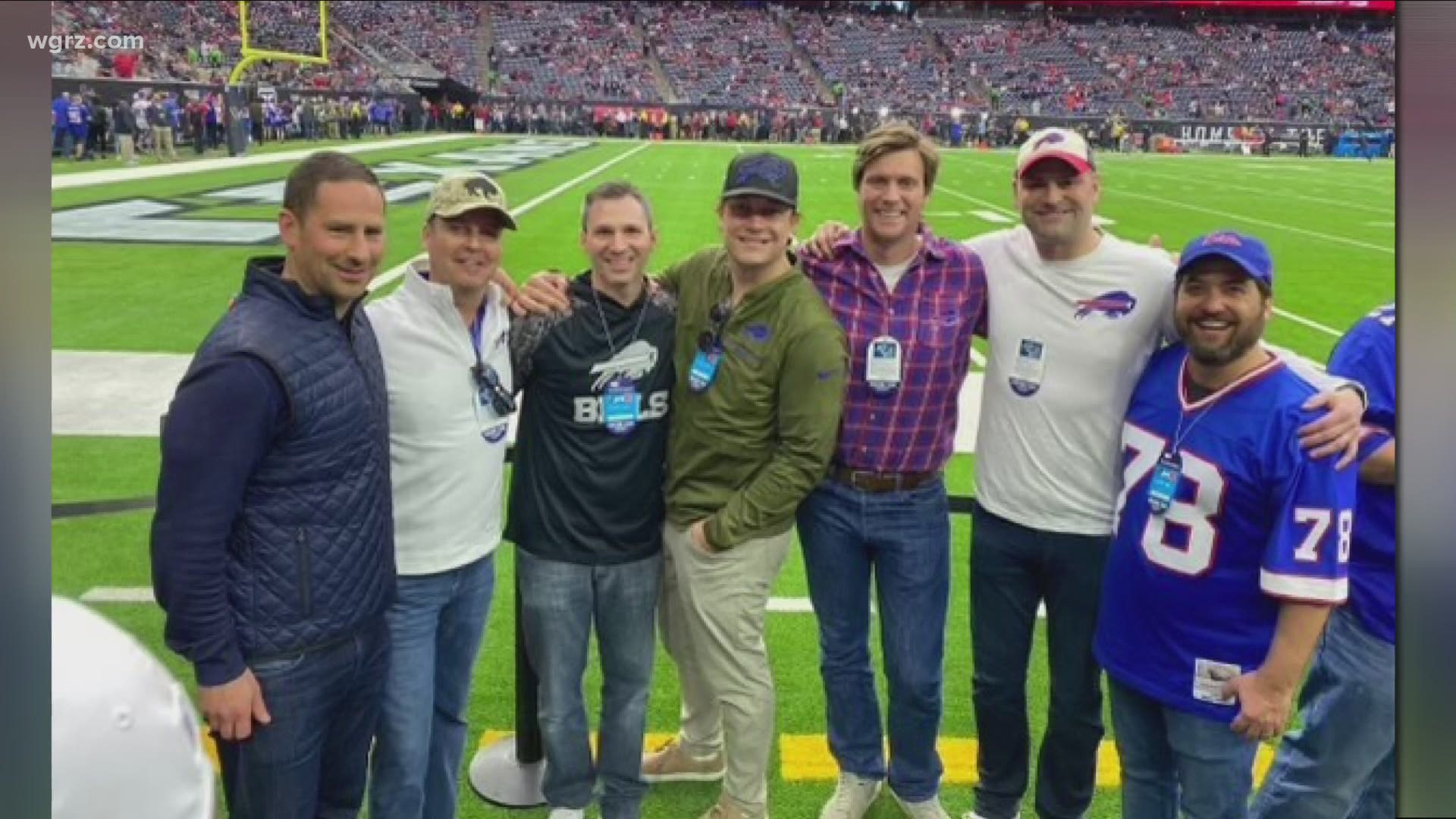 HAMBURG, N.Y. — There are signs of Buffalo Bills fever just about everywhere you look in Western New York.

One billboard, located about a mile from Bills Stadium, honors a lifelong fan who passed away suddenly eight months ago.

The billboard reads “One City, One Team, One Heart, One JBB,” and includes a photo of Jaron B. Bruzgul, who died on May 1, 2020, leaving behind a wife and four young children.

“When we lived in New Jersey he still had season tickets and he would come home to Buffalo every weekend when the Bills, played,” recalled his widow, Andrea, while standing near the billboard at the seven corners in Hamburg.

The couple moved back to Western New York after their twins were born, and before having two more children, the youngest of whom was only 15 months old, when their father died.

Like many parents do, there was a place in the family home to measure the children as they grew.

Although in Bruzgul household, instead of marking those milestones on wall, they mark them on life-sized poster of Bills Hall of Fame defensive end Bruce Smith.

Jaron, who as a youngster idolized Smith and the other members of the Bills teams that went to four consecutive Super Bowls, had looked forward to a day when his beloved Bills might again climb the NFL summit.

There is a heartwarming story behind this billboard supporting the @BuffaloBills and honoring a fallen member of #BillsMafia . I hope you’ll be able to watch it tonight at 6 on @WGRZ TV 2 #Buffalo pic.twitter.com/qMF6Tfh2ru

“People ask if it was your worst nightmare, but I honestly say ‘no’ because it was never a thought that crossed my mind.”

She’s referring to when her husband, despite being avid runner and in the peak of health, died of an apparent heart attack at age 41.

“I gave him a kiss on a Thursday night, only to wake up Friday morning to find him," she recalled of that fateful day.

“It’s been eight months … in some ways if feels like just yesterday, but in others it feel like an eternity,” she said, as her four children, now ages 2 through 6, played under the watchful eye of her mother while Andrea spoke to us.

“What I'm struggling with right now is thinking my kids are going to forget about him. They’re so young,” she said.

Memories have a way of flooding back, as they did, when she took the children to see the billboard for the first time earlier this week, not knowing quite what to expect.

“Their faces just lit up and they pointed up to the sign and said, ‘There’s daddy!’ ”

The billboard was taken out by a group of Jaron’s friends, who despite being scattered around the country, remained close since their high school days.

In fact, they had all gotten together a year ago to travel to Texas and watch the Bills take on Houston in a wild card playoff game.

Andrea was unaware of their effort until one of them took a picture of the billboard and sent to her. When she called him he told her, “It's just a little way of letting you know JB is always here ... and to let you know how special of a person he was."

For Andrea there are, of course, more places to see her late husband than on a billboard.

Primarily, she sees him in the faces of her children, and hears him in their laughter. Particularly in 6-year-old George. “He’s 100% JB,” she said.

The kids wear an image of their father on medallions which hang as close to their hearts, as the shirt Andrea wore on Friday, which envelopes hers.

“He used to wear it to almost every game,” she said. “He also had Zubaz, but I’m holding onto those and pass them on to my kids."

The billboard is located near the seven corners in Hamburg, about a mile from where the Bills play.

“I feel like JB is resenting all of Buffalo right now. … Hope is always something he believed in, and I think he would just be in awe," she said.