It's funny how in life, things often come full circle.  Ten years ago, Billy Gerken of Amherst was a student at Mill Middle School when one of his teachers asked him to take part in a walk for the National Kidney Foundation.    Now fast forward to last summer, Billy was hanging out one day with his college roommate from RIT, Rob Glasby, who lives in Kenmore, when Rob told him that his kidneys were failing. 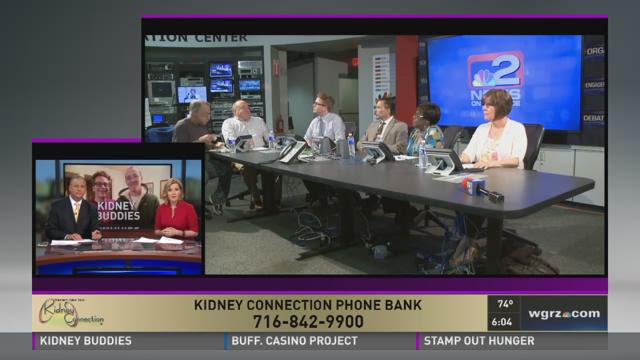 Ten years ago, Billy Gerken, of Amherst, was a student at Mill Middle School when one of his teachers asked him to take part in a walk for the National Kidney Foundation.

Now fast forward to last summer, Billy was hanging out one day with his college roommate from RIT, Rob Glasby, who lives in Kenmore, when Rob told him that his kidneys were failing.

Alport Syndrome causes scar tissue to build up in the kidneys. In its most common form, 50% of sufferers will need dialysis or a transplant by age 25.

That same night Billy started thinking about whether he could donate one of his kidneys to Rob. His mind was racing.

Billy decided he would get tested to see if he'd be a match for Rob.

Scott Brown: "What did you think when he said maybe I could be a donor?"

Rob Glasby: "I was speechless. I didn't know what to say at the time other than thank you, and I would do the same for you."

While the testing started at ECMC, Rob went on home dialysis, hooked up three times a day.

Rob was put on a waiting list for a donor, a process that could take years, and even if Rob got a donor, chances are that a kidney would come from someone who had passed away.

It turned out there was good news for Rob, Billy was a match, and the surgery would be a go.

Rob and Billy often call each other buddy. Now, they were going to be kidney buddies.

Scott Brown: "Do you think this was all meant to be?"

"I do, and for more reasons than one. Everything just kind of came together and it's kind of like this was meant to be, it was fate, you know?" said Billy.

"Billy's been a blessing, he's been our angel, truly has. Him and my son have been, they're just like brothers in a sense and like Rob says, 'eventually you know I'm going to have a piece of him in me, and then we truly will be bonded for life,'" said Rob's mom Barbara.

For the transplant surgery, ECMC permitted 2 On Your Side to be right in the operating room as a way to increase public awareness about living kidney donation.

Billy is brought down first, his surgery is done laparoscopically which will aid in his recovery time.

After about only two hours of surgery, one of Billy's kidneys is removed and given to the doctor who will implant it in Rob, Dr. Sunil Patel.

"It went great. The donor was very stable through the operation, we removed the left kidney, it looked beautiful," said Dr. Kayler.

Next door, Rob's portion of the transplant will take about three hours and involves connecting a vein and an artery to Billy's kidney.

The best news is that Billy's kidney begins to work inside Rob right on the operating table.

Just 24 hours later, we're back at ECMC as Billy is feeling well enough to walk down the hall to see how his kidney, and his kidney buddy, are doing.

The buddies catch up on how each other are feeling, and sign each other's special kidney pillows.

Billy will go home the next day, and Rob will be discharged just a few days later.

Three weeks later, we catch up with the buddies.

Rob's energy is starting to come back and Billy has already returned to work.

"If I didn't know that I got a kidney out, I really wouldn't know it now, 'cause right now I feel back to normal," said Billy.

Scott Brown: "And so if a friend of yours said hey I'm considering it (becoming a donor), what would you tell them?"

"Absolutely do it," responds Billy.

Scott Brown: "I know you guys were close before, has this brought you even closer would you say?"