Sabres team dog now a celebrity, after being a stray and inmate

Rick the Newfoundland puppy is being trained inside a local jail to be a service dog. The program is the first of its kind in Western New York. 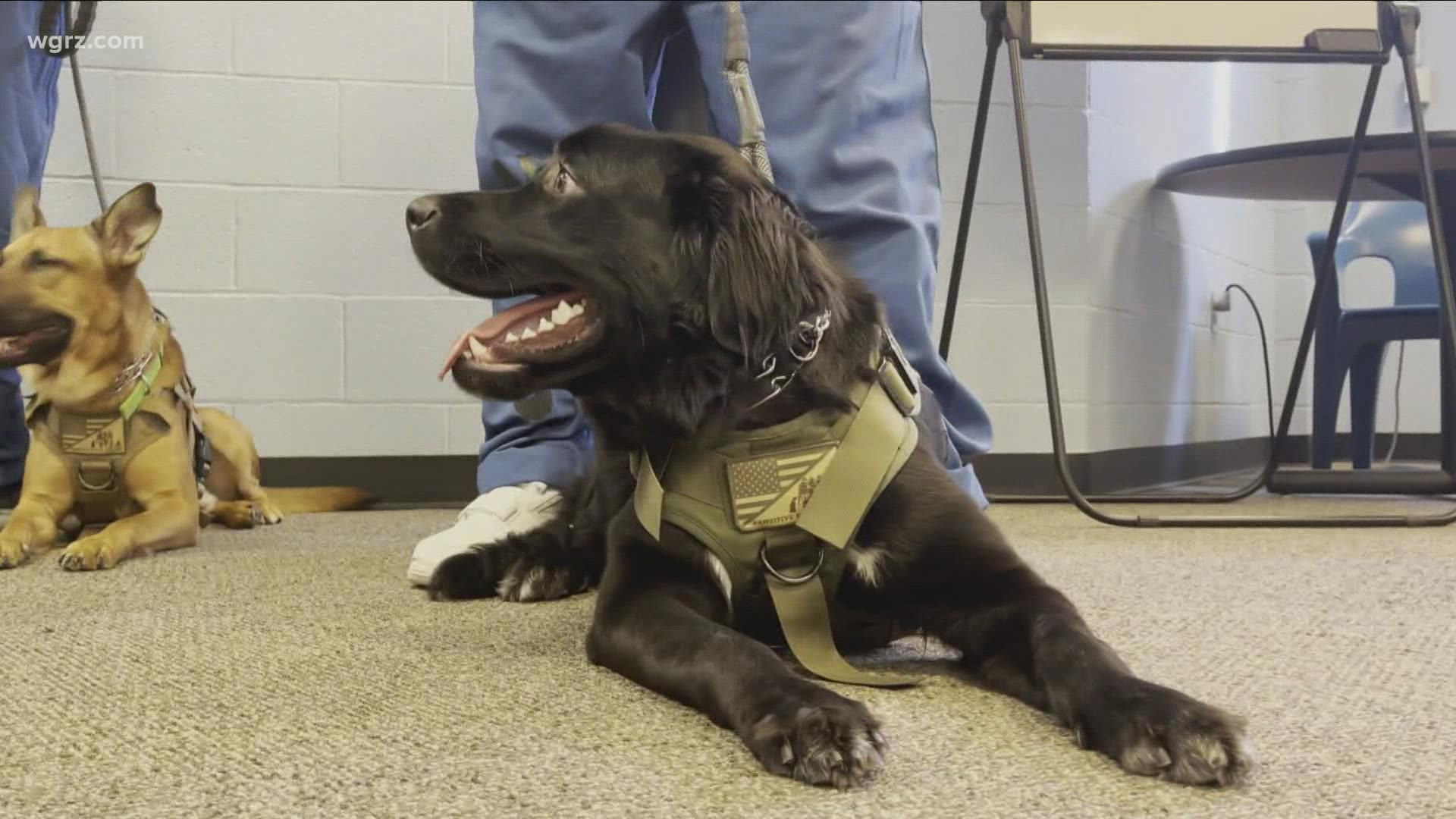 The Sabres recently announced him as the franchise's first-ever team dog.

But in between hockey games, photoshoots, and special appearances, Rick spends his time in an unlikely place: jail.

He currently resides at the Niagara County Correctional Facility, along with 3 other pups.

"The dogs are housed right in with the incarcerated individuals, and they live there," said Niagara County Sheriff Michael Filicetti. "They live with them."

The dogs are part of the Pawsitive for Heroes program. They get trained to become certified service dogs to be placed with a local veteran.

"The demand (for service dogs) is huge," said Chris Kreiger, president, and co-founder of WNY Heroes, a group that's been helping local veterans since 2007.

Chris came up with the Pawsitive for Heroes program after seeing success in his own life due to his service dog.

"Do you think your service dogs have helped save your life," asked 2 On Your Side's Michael Wooten. "Absolutely," Chris responded. "I don't even have to think twice about that."

On average, we lose 17 veterans to suicide every single day, and Chris said the pandemic has only exacerbated the problem.

"When it comes to veterans, all that time to just isolate also causes a lot of time to just think about your time in service," Chris explained.

Right now, Rick is joined at the Niagara County Jail by Bandit, a Belgian Malinois, Cari the Dobermann, and Mayhem the pit bull.

Cari, the only female, is named after Army Staff Sgt. Cari Anne Gasiewicz, a Depew native who was killed while serving in Iraq in 2004.

"We have reached out to several other families right now who are on the waiting list to have a service dog named after their loved one," Chris said.

Sheriff Filicetti said the program also benefits the inmates, who serve as handlers to the dogs and help John Knoph, the actual dog trainer.

Henry Stovall is with Bandit pretty much 24 hours a day, 7 days a week.

"He's a great dog," Henry said. "He's made a big difference for me. You know, I've learned patience."

When possible, incarcerated veterans are chosen to serve as handlers. The Sheriff said that brings it full circle.

Staff at the jail even the inmates that aren't part of the program enjoy having the dogs around.

"I'm appreciative of what the chief and the sheriff and the trainers have given me, this opportunity to give back," Henry said.

The Niagara SPCA has also joined the program. Rick was brought there as a stray.

Tina Kennedy, a canine behavior specialist at the shelter, said Rick's progress has been amazing.

"He was a handful when he was (at the SPCA)," Tina said. "So he is definitely doing great. His training is going wonderful, and I think he's got some great potential."

Everyone involved described it as a win-win for the organizations, the animals, the inmates, and, of course, the veterans who will eventually receive the service dogs.

"When they're done and they get placed with a veteran, they'll work with me probably a month the public," John said.

Chris and Sheriff Filicetti said they hope to continue the training program at the Niagara County Jail for years to come. Chris is also having discussions with leaders at other local correctional facilities to further expand to keep up with the demand for service dogs.

He wanted to remind Western New Yorkers that while Rick is still early in his training and is playful with fans, service dogs are protected under the Department of Justice and are constantly working.

It's expensive to train service dogs, so if you'd like to donate, you can do so on the WNY Heroes website.