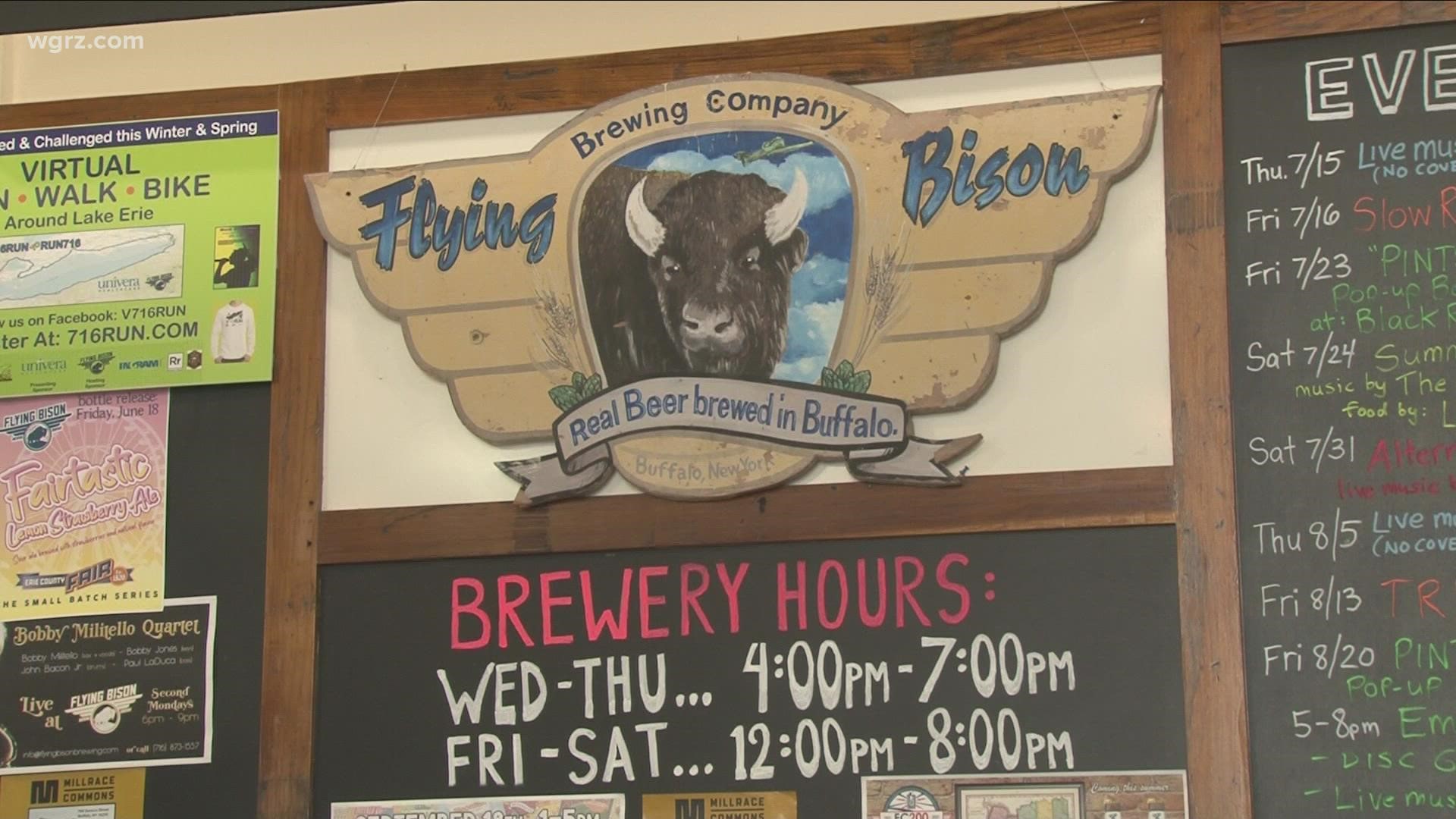 BUFFALO, N.Y. — Flying Bison Brewing Company is now of legal drinking age — it's their 21st anniversary —and they're celebrating the milestone with an outdoor party this weekend.

It's Saturday, September 18 from 1 p.m. to 5 p.m. at the brewery, located at 840 Seneca Street in Buffalo. The party will feature beer, food, and music by "Those Idiots."

"It's really just let's get together and celebrate this accomplishment and have a good time. That's as complicated as it gets," said founder Tim Herzog.

Herzog started making beer at home in 1981 after his wife bought him a homebrew start-up kit. He wanted to learn the ins and outs of beer making, believe it or not because he didn't really like beer at first. Herzog said he tried a lot of bad beers back in the day, but eventually found one he liked.

"I had no idea what it was," Herzog said. "I knew it was beer from Ireland. I'm half Irish and half German so I am genetically pre-programmed to enjoy beer. I brought it home, opened and tried it, and wow what a difference"

And from there his passion, well, just started brewing.

The Rochester native turned Buffalonian originally wanted to be an art teacher and/or graphic designer, but subbing and freelancing wasn't paying the bills so he started taking brewing more seriously and set out on a new adventure — at a time when not many people in Buffalo were talking about brewing beer and certainly not starting a brewery from the ground up.

"When we first opened our doors, there were two brewpubs in town. Buffalo Brew Pub and Pearl Street," Herzog said. "We were the first to distribute beer — the first fully distributing brewery to open in Western New York in 100 years. I had to start at City Hall with licensing explaining okay, here's what a brewery is and here's what a brewery does and kind of invent a road to be able to walk down it. A little bit challenging."

Flying Bison operated out of a warehouse on Ontario Street in Riverside for 14 years.

"The day that we opened, I started putting kegs in a pickup truck that a friend of mine drove, and I delivered. $400 or so dollars in our checking account. Talk about under-funded, but it was either start or don't start. Not going to finish if you don't start," said Herzog.

The NYS Craft Act was enacted in 2014 and allowed taprooms, so Flying Bison got the ball rolling on their current location on Seneca Street.

Colin Herzog was just 14 years old when his dad started Flying Bison. He was kegging beer by the age of 18; now he's what he likes to call a "brewer etc." because he makes beer and does paperwork and packaging and just about everything in between.

"I still feel so much gratitude, and yeah, every time I see Rusty Chain on a shelf I am reminded of when we made the very first batch of Rusty Chain. I still have that same spark and am still super proud of the beer. It really makes you feel as though you have been doing something worthwhile," said Colin Herzog.

Over the past two decades, Flying Bison has created a number of specialty beers to benefit local charities and organizations. They even created a special beer to celebrate the Erie County Fair. He calls the creations and collaborations "Imagineering."

"The idea behind this wasn't just to get open and whack out a few beers, make some dough and get on a boat. It was about building something that will last throughout generations. It's a part of making Buffalo a better place to live which I think is always exciting," said Herzog.