As the O'Neil family of Pendleton seeks life-saving cancer treatment in Memphis for 9-year-old Connor, friends in WNY are planning a street hockey benefit on Aug. 1. 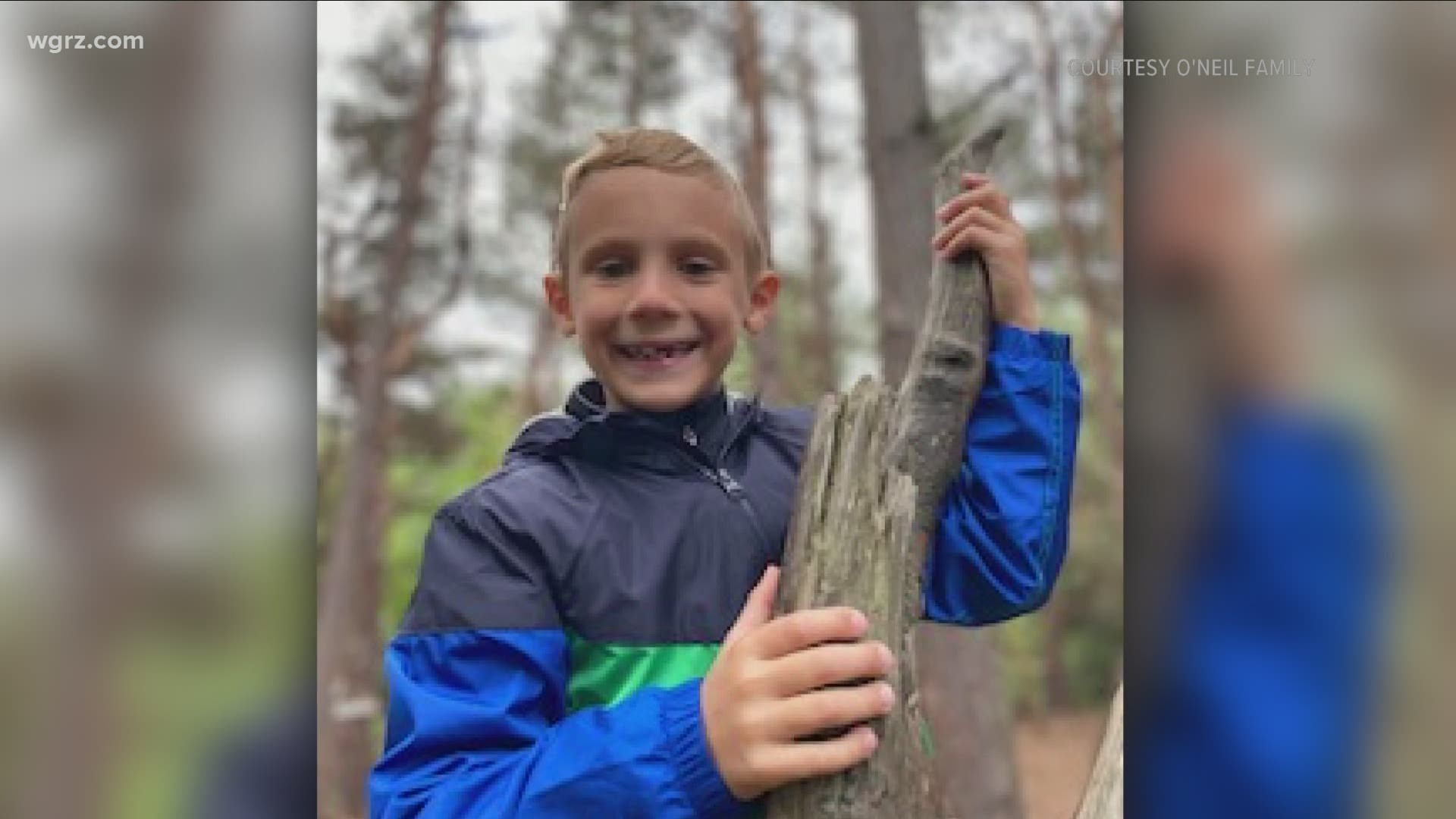 PENDLETON, N.Y. — Sweet Home graduate Keith O'Neil and his wife, Jill, were used to moving around the country for his career in the NFL, but this move is different. They're seeking treatment to save the life of their 9-year-old son Connor who was diagnosed in May with a rare brain cancer. Now, friends and family here in Western New York are coming together to show their support for Connor and the O'Neil family by holding a street hockey tournament and benefit on Sunday, August 1.

"He has a lot of energy. He's very determined. Nothing really stands in his way. He's a strong little kid," said Jill O'Neil, Connor's mother.

That's why Connor's headaches and nausea in May caught the his parents off guard. Jill, a nurse, said she knew something wasn't right. After many tests and scans, doctors found a mass on Connor's brain the size of a mandarin orange.

The Starpoint second grader was diagnosed with a high grade Mesenchymal and Neuroepithelial Tumor with CIC-DUX4 Fusion, a cancer so rare it's only been documented a handful of times in North America.

"They said we're really surprised to see how well he's doing, just because it's such a big mass," said Jill while fighting back tears. She said the tumor is malignant and extremely aggressive.

Connor's father, Keith, who was a linebacker with the Super Bowl XLI winning Indianapolis Colts in 2006 is a stay-at-home dad with Connor and his 5-year-old brother Tanner.

"It's hard. He's a tough kid. It's extremely difficult because he doesn't understand what's going on," said Keith. "The other day in the car he was asking, 'what if it doesn't go away or where did I get it?' And it's just hard to answer those questions for a 9-year-old."

Just six days after Connor started showing symptoms, he had brain surgery to remove the tumor at Oishei Children's Hospital in Buffalo.

"We knew we had a long road but it was one hurdle we got over with a lot of success," said Jill.

Within 40 days, though, Connor's tumor grew back. Doctors and the O'Neil family decided the best course of treatment would be another surgery, followed by 30 rounds of a special proton radiation treatment performed at St. Jude Children's Research Hospital in Memphis, Tennessee. That will be followed by 6 to 8 months of chemotherapy.

Because of Covid protocols, the O'Neils cannot live in complimentary patient housing with a sibling, so they were forced to rent a home in Memphis and both Keith and Jill's parents have moved there to help support them.

"We have so much support which we are incredible grateful for," said Jill.

Still, the loneliness and fear are stressful, especially for Keith, who is open about his battle with mental illness.

Keith shared his story in 2017 to WGRZ's Melissa Holmes about his battle with bi-polar disorder, anxiety, depression and substance abuse, which nearly took his life. He wrote a book, Under My Helmet, to help others and try to end the stigma of mental illness.

While focusing on his son's physical health, Keith is paying close attention to his own mental health.

"I'm in a foreign place. Stressed. It's really hard on mental health, especially bi-polar. I'm not around my doctors or my support system or therapists. So I have to make sure I take my medication. I'm talking to my therapists on the phone and my psychiatrist," said Keith. "It's very important because my son needs me, and so does my wife and family."

But friends and family in Western New York want Keith and the O'Neil family to know they have their back.

Keith's best friend, Paul Moley, and his fellow board members with the Wheatfield Blades Hockey Association have planned a street hockey tournament and benefit for Sunday, August 1, to benefit Connor, and to show Keith and his family that they're not fighting this alone.

"We can't help Connor get better quicker. That's in God's hands and the doctor's hands. But we can certainly help the financial end of it and that's what we're trying to do," said Moley.

Hundreds of players, dozens of company sponsors and countless volunteers have signed up to help. The money raised will help offset the financial burden for the family now carrying two mortgages, paying for medical expenses incurred from Connor's first surgery, Jill taking a leave from work, and other added expenses. Moley said however, any additional funds raised and not needed will be donated by the O'Neil family back to Oishei Children's Hospital. Moley said planning and participating in this fundraiser is a way to help his friend, who bravely and publicly shared his mental health story to help others.

"He spent a good part of his life after the NFL helping other people in that situation, sharing things most people would never want to talk about. He did that to help people. And now with what's going on with his son, it's something where the community can come back and help somebody who's helped so many other people," said Moley.

Connor's prognosis is unknown because this tumor is just so rare, but to get through this, Jill and Keith are relying on their faith.

"I just feel it in my bones that he's gonna do great and God's been walking us through this whole thing. We just keep praying," said Jill.

And they're relying on each other.

"There have been a lot of things in our 15 years of marriage that brought us closer together. This is just another. I think it's going to be our toughest obstacle, but we know we'll get through it together. What doesn't kill you makes you stronger," said Keith. "Deep down Jill and I both know we'll be fine. Connor will be fine."

To donate to the Connor O'Neil Go Fund Me page, click here.

To learn more about the Connor Strong Street Hockey Tournament and Benefit on August 1 at Hockey Outlet on Niagara Falls Boulevard in North Tonawanda, click here.