The best day of his life was also the worst. Justin Waclawek lost his wife Alison during the birth of their daughter. 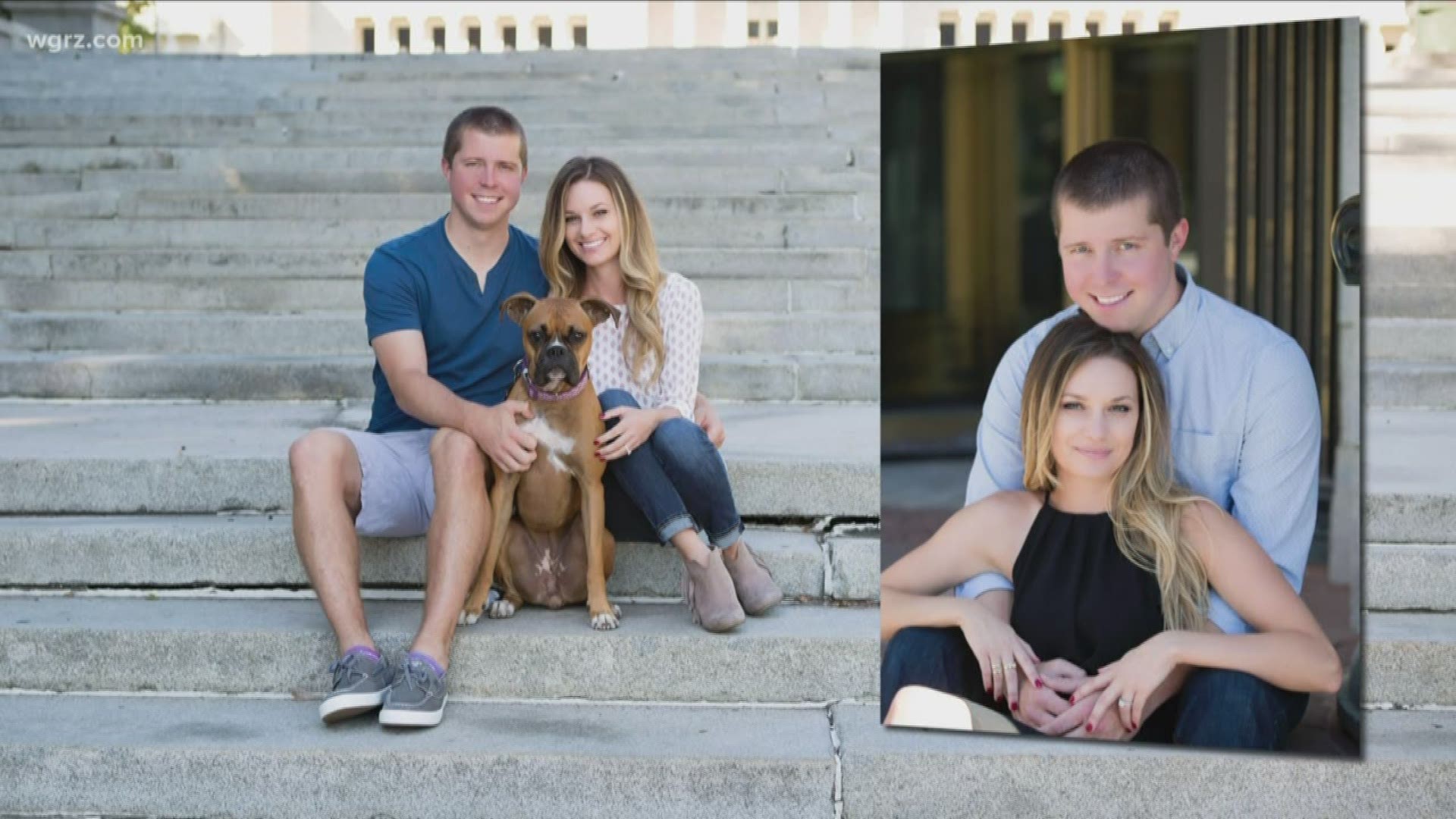 BUFFALO, N.Y. — It seems shocking that women continue to die during childbirth in the 21st century. There is one maternal complication in particular that often comes during labor with no warning signs, and it is often fatal.

Nearly 6 months ago it took the life of a 31-year-old wife and soon-to-be first time mother from North Buffalo. Her husband is sharing their story with 2 On Your Side to raise awareness about Amniotic Fluid Embolism, and more importantly, to ensure his wife is never forgotten.

Take a stroll along Buffalo's Hoyt Lake and you'll come upon a brand new park bench engraved with a special tribute.

It says: In loving memory of Alison Rose Waclawek. Today is still the day that I will love you the least. Because my love for you will never stop growing.

But who was Alison?

"She was as beautiful inside as she was on the outside," said 30-year-old Justin Waclawek. "My wife Ali was everything to me. Everything."

Justin met Alison - or Ali - at the D'Youville College School of Pharmacy and the two hit it off.

"I knew quickly - I knew immediately - that I was in love with her," he said. "She was just fun and so kind and stubborn like me, but in a good way. She just had this way of wanting to give back to other people."

Ali was born in Rochester, New York to Allen and Amy Carey. She graduated from Churchville-Chili Senior High School and earned a bachelor's degree in biology from the University at Buffalo. She earned a doctor of pharmacy degree from the D'Youville College School of Pharmacy in 2016. Ali traveled to the Middle East in 2008 as a cheerleader with the Buffalo Jills to support the troops, and went to third world countries to help sick children.

"She had all these accomplishments and all these passions in her life, but the thing she was obsessed about was being a mom," Justin said.

Justin and Ali were married in 2017, and the following year she was expecting.

"She had a great pregnancy," he said. "She was tired and had a little bit of back pain at the end, but for the most part she couldn't have been more pleasant."

Justin said the only complication she had was placenta previa, which corrected itself in the late stages of the pregnancy. Ali had a sonogram at 39 weeks which showed she was healthy, and she saw an incredibly detailed image of their healthy baby girl.

"We got these incredible 3D photos that are literally what Ada looked like when she came out. You could see her eyelashes. So Ali got to see her. It made her so happy. That was the happiest day I think of her life, was that day getting to see her baby."

But that would be the last time Ali ever got to see her baby.

On August 16, 2019, Ali's water broke at home. Justin said things seemed fine as the staff at Sisters of Charity Hospital induced her, followed by a few hours of labor and an epidural. Justin said Ali was even joking.

"Her last picture on her phone is a picture of me sleeping and a selfie of her saying 'I can't sleep, it's not fair.'"

But then Ali started to feel nauseous, so Justin left the room to get a nurse.

"When I went to go back to her her eyes rolled into the back of her head. And she kind of went out. I said something. The nurse came over and started calling for her. She coughed for a second. Her eyes opened and she went back out. The nurse did a sternum rub, realized she was out and quickly hit the code button."

Ali was having an Amniotic Fluid Embolism, a rare maternal complication affecting 1 in 40,000 deliveries. It is essentially an allergic-like reaction to amniotic fluid getting into the bloodstream. It prevents the blood from clotting anywhere in the body, leading to cardiac arrest.

According to the Amniotic Fluid Embolism Foundation, AFE is "unpreventable, unpredictable and often fatal."

Justin said within 5 minutes a nurse came to tell him they had the baby out and that she had a heart rate and was breathing. They transferred the baby to the NICU at Oishei Children's Hospital in Buffalo.

Justin waited an agonizing 3 hours before he learned the fate of his beloved wife.

The AFE Foundation's Executive Director, Miranda Klassen, is an AFE survivor herself. Her son also survived and is now thriving 11 years later. Click the link below to hear an interview with Klassen about the condition, risk factors, treatment, research, and Klassen's relationship with Justin Waclawek. 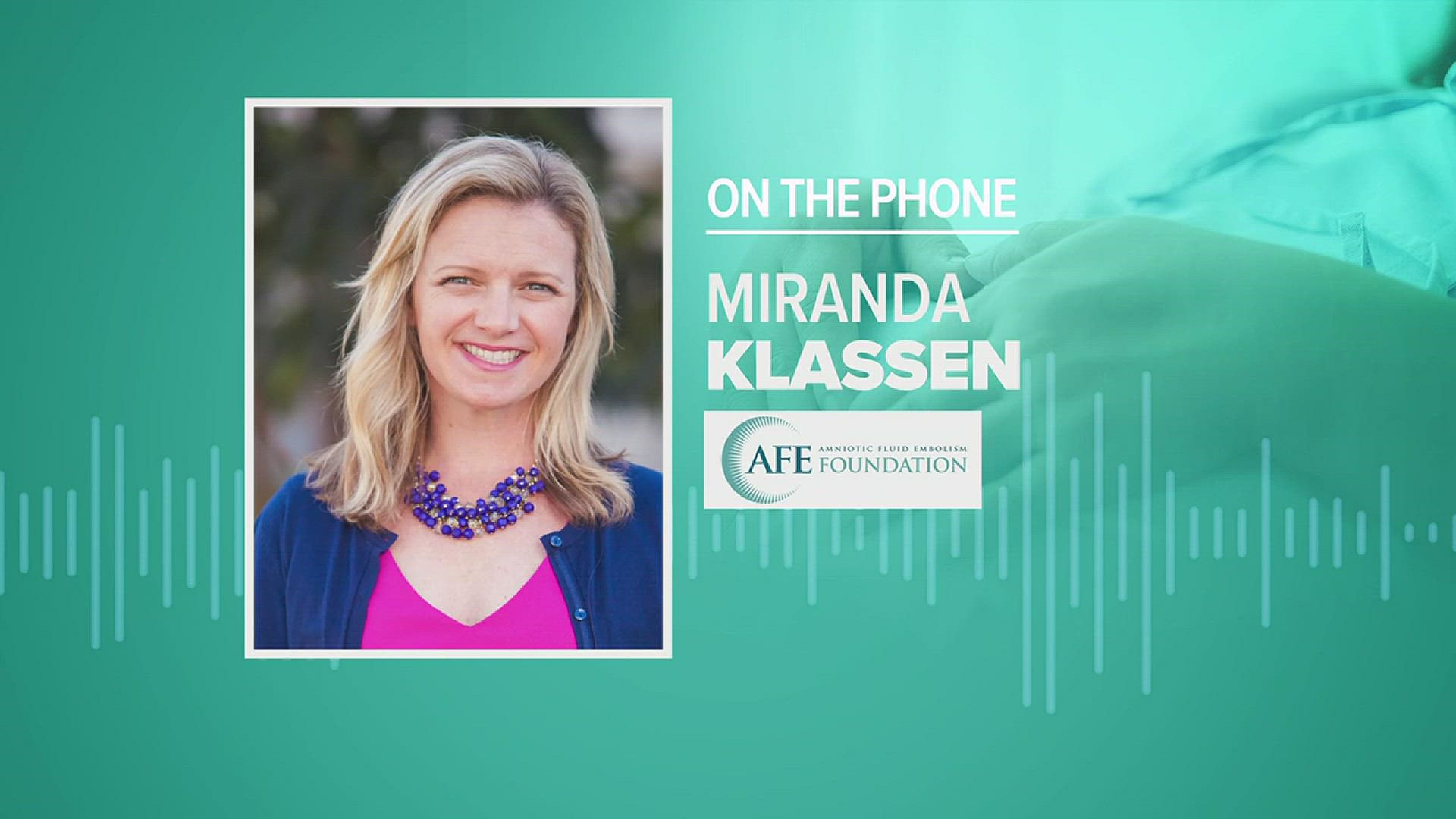 "Ada's doing phenomenal. She's hitting all her milestones," Justin said. "She's really a miracle because a lot of times the babies don't turn out to be healthy like this."

Justin says he has to be strong for his daughter.

Every day is a balance of grief and joy. Looking at his beautiful daughter Ada, he sees the wife he lost too soon.

"The nose couldn't be more perfect and the eyes are identical. And they have that same sparkle. When she lights up and she sees someone she knows, it's the exact same smile her mom had.  And I tell her it kills me and it saves me everyday at the same time," he said. "I try to just take it a day at a time. I try not to think about the future because when I do I get upset for the things that Ali won't be here for."

But Justin also knows Ali is with them and he feels her presence when they sit on her bench at Hoyt Lake, a place that Justin says was Ali's favorite spot in Buffalo.

"I tell [Ada] how beautiful her mom was, and how smart she was. And I'm going to tell her about her everyday," he said. "[Hoyt Lake] is a place I can go with Ada, where everyone can go, to try to heal. Because it's not just me. Ali's death has left a hole in so many people. It's really not fair that she's gone because she had so much left to give to this world."

Justin's hope is that he can carry on Ali's legacy, keep her memory alive, and raise Ada the way Ali would've wanted.

And what is the meaning behind the engraving on Ali's memorial bench? Today is still the day that I will love you the least. Because my love for you will never stop growing.

Justin wrote that and read it in his wedding vows for Ali. He read the same words in her eulogy.

It was Ali's friends who came together to purchase the memorial bench, and they also planted a tree in her honor at Delaware Park. Elizabeth Mair was Ali's best friend, former roommate, and maid of honor.

"At her baby shower, I gave a little speech and I said, 'Your baby girl is so lucky to not only have you as her mom but to have you as her role model.' And I hope that that can still be true in the way that all of us talk to Ada about Ali and talk about how amazing and giving and selfless she was. And I hope Ali is still Ada's role model, because all of us will keep her alive for Ada so she'll know her in that way," Mair said. 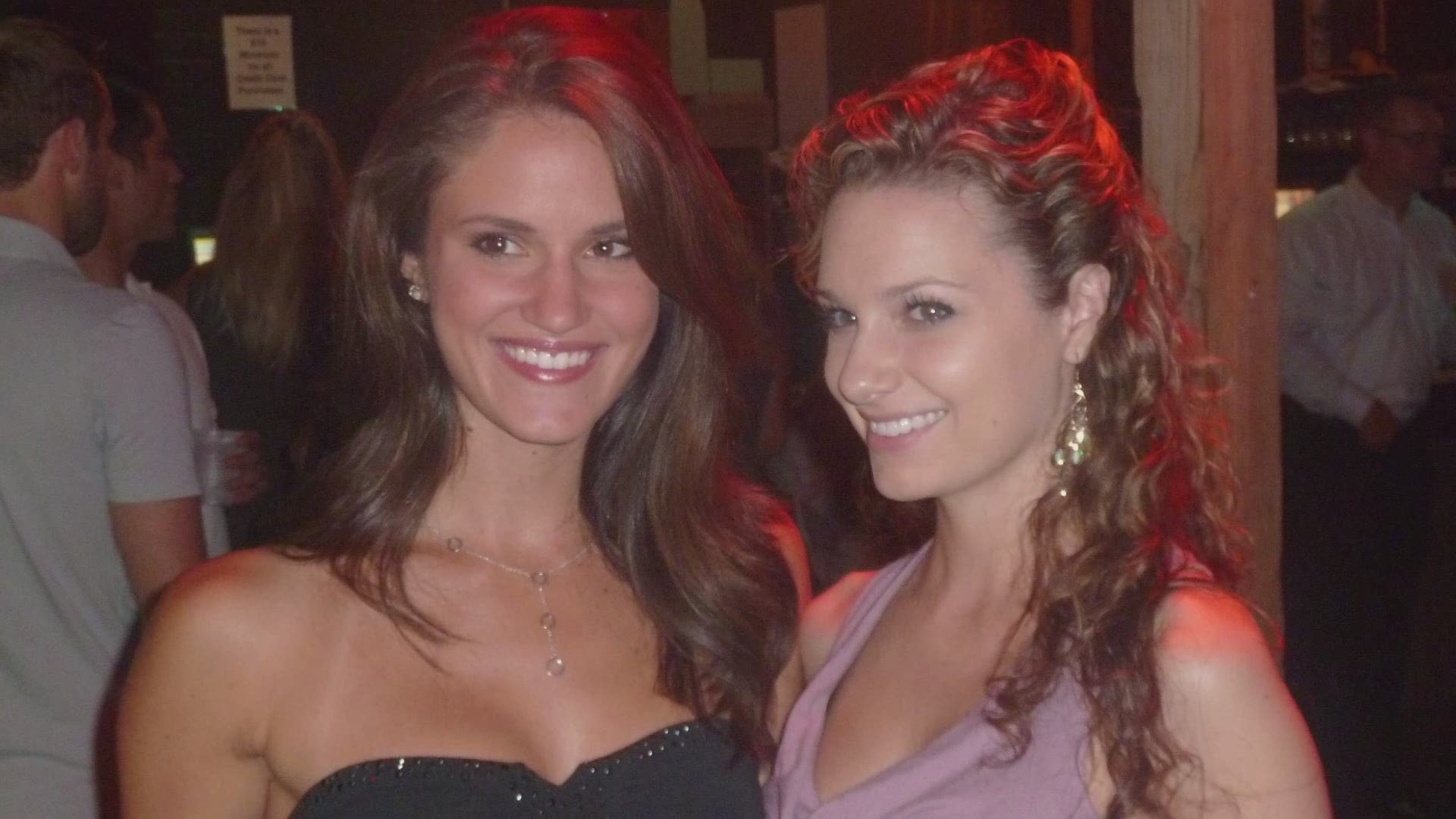 Many wonder how they can help Justin and Ada Waclawek. Justin says he's got all the help he needs with an incredible support network of family and friends. A Go Fund Me account set up for Ada raised $120,000 and is no longer accepting donations. Justin is now asking for help for the AFE Foundation, which has very little funding because the condition is so rare. He also asks that donations be made to Oishei Children's Hospital in Buffalo. Justin credits the doctors and nurses at Oishei for keeping Ada alive.

Family and friends held a blood drive in late January in Ali's honor in Rochester, where she grew up. They plan to hold another blood drive and fundraiser for the AFE Foundation and Oishei Children's Hospital over the summer in Buffalo. Once details of the event are available, they will be posted on WGRZ.com.

RELATED: Community rallies around father and newborn after tragic death of mother during childbirth

RELATED: Woman donates breast milk to NICU babies after losing her own son