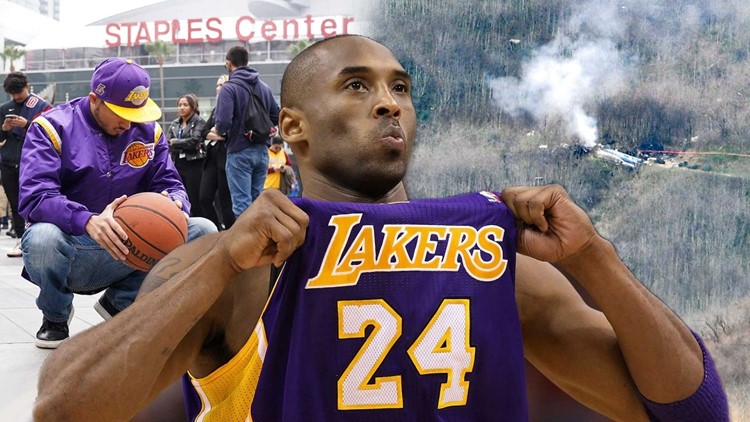 Remembering Kobe Bryant: What to Expect Ahead of the Staples Center Memorial

Kobe Bryant's fans are expressing their grief in tributes around the world.

After the shocking news of the NBA star's tragic death, memorials immediately started popping up for the late athlete. Bryant died in a helicopter crash alongside eight others -- including his 13-year-old daughter, Gigi -- on Jan. 26. His dedicated fans have yet to stop honoring and paying their respects to the former Los Angeles Laker, who touched so many people's lives.

Artist Levi Ponce, who painted the Bryant mural at 100 N. La Brea Ave. in Los Angeles, told ET that upon hearing the news of the athlete's death, he knew that he had to do something. "I painted him in 2016 when he retired and I didn't think I'd be painting him again so quickly, and definitely not under these circumstances," Ponce exclusively told ET on Friday. "But me and a group of friends who all paint, we got together the next day and we said, 'You know, we should do something,' and the stars aligned."

"I got a call from the owner here and he said, 'Hey, I would love to donate my wall,' and we wanted to donate the artwork. As a community, we were able to come together and create this monument. Not just to sort of express our angst and our anger at the situation, but also to provide sort of a community space for people to come together and to gather around Kobe and his legacy."

The mural took about three days to paint, and Ponce wanted to make sure that he portrayed Bryant's full life, not just his career as a basketball star. "When I first painted him, he had retired so I mostly did a Laker thing," he explained. "But I wanted to do something a little bigger than that. So we alluded to life outside of basketball as well and so we just wanted to paint a bigger picture with this mural."

My second Kobe mural after the first in 2016. Growing up in LA my generation saw Kobe develop into a superhero both on and off the court... when I first painted him in 2016 I was sad to lose him as a Laker. Never could I have imagined I would be painting him again so soon... the owner donated the wall and we donated the artwork. A small gift for Kobe compared to what he gave us. KOBE! I designed it but I barely painted on this one. Big thank-you’s out to the artists and my @sarahannponce for making it happen. The Art Team: @reddortiz @insomniart @rysta__ @stay_sappy_ @mighk_rivera @ltejeda81 @jpmurals @mannylinx @_meversus @mighk_rivera @goreystein @theechoparker @nicknackfilms (drone) @jm_photography_1_ @customautocraftla (donated wall) And the world famous @kiptoe1

And Ponce's isn't the only mural in the city. Many pieces from various artists have appeared all over Los Angeles in recent weeks.

Tributes started in Los Angeles at the Staples Center, also known as "the house that Kobe built," on the day Bryant died. As the 2020 GRAMMY Awards were being held inside, fans brought giant floral displays, handmade signs, and came out in their L.A. Lakers gear to pay their respects.

The digital billboard outside the Staples Center featured Bryant's image with an "In Loving Memory" tribute.

Our thoughts and prayers are with the Bryant family and friends, our Laker family, our Los Angeles community and fans around the world. pic.twitter.com/vG25iDHflW

ESPN writer Justin Tinsley tweeted, "I’m literally in STAPLES Center right now. Everyone has the same look of loss right now. We’re all zombies. Surreal doesn’t even begin to describe what it feels like."

I’m literally in STAPLES Center right now. Everyone has the same look of loss right now. We’re all zombies. Surreal doesn’t even begin to describe what it feels like.

Fans were forced to gather next to a makeshift black fence surrounding the Staples Center as the arena played host to the GRAMMYs.

I can’t even believe this is real... right now outside Staples. 💔 pic.twitter.com/yuunIbG2Ms

A growing crowd at a memorial for #KobeBryant outside in Staples Center. @KTLApic.twitter.com/nsb79I73wc

That was just the beginning when it came to tributes. Less than 24 hours after Kobe's death, a mural popped up in Los Angeles at Vineyard and Pickford Street featuring Kobe and his daughter, Gianna, who also died in the helicopter crash. "Kobe & Gigi Forever Daddy's Girl," the mural reads.

A new mural honoring @kobebryant and his 13-year-old daughter was created in Mid-City Los Angeles less than 24 hours after they were killed in a tragic helicopter crash with seven other people. This is at Vineyard and Pickford Street. @ABC10#RIPKobeBryantpic.twitter.com/Feu3WBVkdk

Lights for a legend.

Los Angeles City Hall lit in purple and gold starting at 8:24 p.m. this evening in honor of Kobe Bryant’s storied championship career and in memory of Bryant, his daughter, Gianna, and all who perished in today’s tragedy. pic.twitter.com/1una7Aj98Z

If you walk outside in New York City today, you’ll see the Empire State Building lit up in honor of a legend. NYC remembers you, Kobe. pic.twitter.com/OJHcFlaovn

In Kobe's hometown of Philadelphia, a handful of buildings and bridges were lit up purple in the athlete's honor. In Newport Beach, California, balloons and flowers were left outside of the housing development where Kobe used to live.

#TSRTakeMoment: Many cities around the world are paying respect to #KobeBryant in special ways. In his hometown of #Philadelphia, different buildings and bridges are being lit purple. In #NYC, the #EmpireStateBuilding has been lit purple and gold in his honor, and the canopy at the airport in #Atlanta has been lit as well!! These are only a few of the cities that are showing their respect 💜💛 (📹: @6abcactionnews)—(📸: @empirestatebldg)

About 300 people gathered for a candlelight vigil Sunday night at Newport Ridge Community Park and memorials are sprouting up all over Newport. Our hearts break for all of the local families who have lost loved ones. Our prayers are with you. 🙏🏻💔

In Ardmore, Pennsylvania, a makeshift memorial with flowers, basketballs and some of the star's jerseys were seen outside the gym of Lower Merion High School, where Kobe went to school.

Before he was a Laker, Kobe Bryant was an Ace. A day after the NBA legend was killed with his daughter and 7 others in a helicopter crash, Lower Merion High School near Philadelphia is in mourning. Tap the link in our bio to read more about how Bryant’s high school is coping with his tragic death.⁠ ⁠ 📷 Michael McCoy / @reuters

And even hours before his death, a new basketball house was opened in Kobe's honor in Manila, Philippines. Celebrities and athletes also paid tribute to Bryant in many ways. The first Lakers game following Bryant's death was an emotional one, as was the NBA All-Star Weekend, which they dedicated to the athlete and his daughter.

The basketball legend's public memorial will take place at the Staples Center on Feb. 24. See more on Bryant on the video below.

Kobe and Gigi Bryant Memorial: How to Watch Live

Inside Kobe Bryant's Relationship With Wife Vanessa and Their 4 Daughters